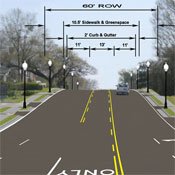 Plans for a more pedestrian-friendly Fortification Street are moving forward.

UPDATED: This story has been updated with additional information about the project's cost and expected completion date.

After almost 10 years of delay, the city of Jackson is starting the renewal of Fortification Street, according to the June 15 council agenda.

"That agenda item you're looking at means what you think it is," city spokesman Chris Mims said. "The Fortification project is moving forward."

The Jackson City Council will vote at its meeting tomorrow whether to authorize $66,174 in payments to property-owners along Fortification Street to begin construction that will make the street more pedestrian friendly and slow down traffic. The city requires the use of property along the street to place equipment during the construction process, but will not be permanently acquiring any land along Fortification Street.

Greater Belhaven Neighborhood Foundation Executive Director Virgi Lindsay said the development, which is slated to begin construction in early 2011, has been nine years in the making.

"We had our first meeting with Mayor (Harvey) Johnson about redoing Fortification Street in August 2001," Lindsay said. "It's been remarkable that we've finally made it this far. I think part of that is because we've been very transparent and we've worked really hard to communicate the importance of this project with the greater community."

"I'm obviously thrilled to see this project moving," Barrett-Simon said. "A lot of time and energy and planning have gone into this, and to see it finally begin is truly delightful."

Although the project will require no expansion of the street onto bordering property, Lindsay said the design calls for sidewalks taking up one existing lane, and it also calls for new, decorative street lighting and the burial of many power lines.

Business-owners opposing the development claimed the renovation could discourage commuter traffic into the area by slowing down travel along the road, which will contain three lanes--two opposing lanes and one turning lane--after completion. David Miller, co-owner of Inland Energy Company, a mineral and oil exploring business on Fortification Street, complained in 2008 that he feared the plan would severely choke the road.

"The real purpose of this new design is nothing less than to kill commuter traffic. They want to cut away the lanes and stuff the 40,000 people who commute twice a day through this intersection into two lanes. This will mean congestion on Woodrow Wilson Avenue and High Street, and traffic problems as people break off Fortification as soon as they can and go through the neighborhoods," Miller told the Jackson Free Press in 2008.

Miller could not be reached for comment this week, however, and his name appears as one of the property-owners accepting payment in the June 15 agenda item for the use of their property for equipment placement.

Construction on the $15.5 million project is expected to take 18 months, but work on street infrastructure like water mains and power lines could begin by the fall, Mims said. The city currently has $8.4 million on hand for the project, from a 2003 bond issue, a federal earmark and a 2003 federal highway safety bill. The city is requesting an additional $4 million from the Mississippi Development Authority this month and hopes to incorporate the full project cost in its 2011 budget, Mims said.

It is always good to hear growth and development initiatives for the City of Jackson. I'm sorry to hear that the project has been 10 years in the making; however, we can not forget the four year period that the Jackson train was off the track. Just thinking.

well, let's place (blame) where it's due. the council didn't do much in those four years to make it happen either. also thinking ; ) while making it more pedestrian friendly is a great, green friendly plan, don't the detractors have a point? cutting a traffic lane DOES mean congestion, no?

I really don't care to get into a one up discussion about "those four years" however, let the record show that Johnson developed a stretegic system for dealing with the renovation of streets and re-pavements: Worse comes First was his motto. Major projects were going on to include So. Congress Street.

oh, no debate or "one up" needed. just saying it's like people blaming the president for every ill. it takes more than one man's shortcoming's to cause a project to be delayed...or fail.

love that i used my pet peeve apostrophe "s" incorrectly! : (

Apparently cutting down traffic path options can sometimes unexpectedly reduce traffic congestion. Not saying I know what will happen here, but: http://www.wired.com/autopia/2008/10/study-shows-tha/ Also, i'm sure those 'decorative lights' look nice (they better, as i imagine they will cost a bit more than ones that just light up), i fear that they will be like the ones that someone thought would be a good idea to install in Belhaven on Poplar: a nightmare to drive by at night. The light needs to shine on the road, not in the eyes of the driver. http://www.darksky.org

I drive regularly on Fortification - there's not much traffic on that road even at peak hours - very light traffic compared to Woodrow Wilson or Lakeland. It's a natural fit to draw more neighborhood businesses there and let roads like Pearl St. and High Street take what isn't present on Woodrow. I'm all for this remake of the street and I have enjoyed many of the modifications in Belhaven over the recent years. I don't know about the lights at Poplar - they never hit my eyes that way at night, maybe it depends on the driver. I agree that safety is important.

the reason there isn't "much" traffic going down Fortification is that it's a terrible street to drive on. you can literally tear up your car between the interstate and State St. however, i am concerned that if you make it a nicer, smoother street, more people will use it. the people of Belhaven better be careful of what they wish for, because pedestrian safety could become a real issue, especially considering that Fortification is an interstate entrance/exit. by design, there's supposed to be high traffic on that street...

Woodrow Wilson used to be almost as bad before the city repaved it, yet it had consistently more traffic than Fortification, probably because it sits at the nexus of UMMC and is close to Fondren. Lakeland leads to St. Doms & Fondren. By contrast, Fortification leads to a more amorphous area between "downtown proper" and then Fondren/UMMC area, though it is the most direct access to Baptist Hospital. I think this is a significant part of why Fortification is not likely to be as highly trafficked as the other streets. I also think that is why Pearl and High streets will continue to be used more for direct access to downtown. It seems to me the city can use a few areas where commuters might stop on their way in and out of the city and spend money, either at the grocery store, or at a restaurant. There are many cities where neighborhoods sit at access points to commuters in and out of the city. I think pedestrian safety is very important, and probably awareness of pedestrians is not very high in Jackson in general. I rarely see people walking downtown, relative to other cities I have lived in.

I suspect most people have already been conditioned to use either Pearl Street, High Street or Woodrow Wilson as access from I-55, so reducing the number of lanes on Fortification shouldn't present a huge problem. Plus, I'm certain the traffic impacts were studied early in this process to determine if reducing the number of lanes was a good idea. The project wouldn't have made it this far if it hadn't.

Thank God this area will finally get the attention and paving it deserves!! I have relatives that live off of Fortification and it is sheer misery driving over there. Hopefully while they are doing renovations for the area they will make the owner of that ramshackle set of empty junky warehouses clean up their property. If they had this crap in the "burbs" they would have been cited to death and made to clean that eyesore up or raze the lot. But I know why nothing has been done to the property owners.........its okay to have eyesores in areas where the neighborhoods are predominantly ones inhabited by people of color. Where is King Kenneth I. ??