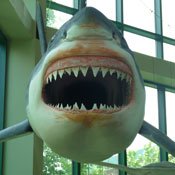 In any other situation, the sight of children wandering around the insides of a giant shark could be horrifying; but it's common fare at the Mississippi Museum of Natural Science's "Megalodon: Largest Shark that Ever Lived" exhibit.

"Shark fins are comfortable!" shouts a little girl as she rolls around on a dark, velvety cushion. Her legs kick, and her pigtails flop from side to side. The cushion she is rolling on is attached to a giant metal frame in the shape of a shark, but not just any shark.

This is the Megalodon—a 60-foot, 276-tooth, 77-ton monster that was king of the ocean, until it vanished 2 million years ago. The exhibit, which opens Saturday, proves just how big the Megalodon was. After walking through the giant frame of the shark, seeing teeth three times larger than a fist and a stack of more than 6,000 cans of tuna that represents the 2,500 pounds of food the shark ate every day, you might leave the exhibit feeling small.

The exhibit is produced by the Florida Museum of Natural History with support from the National Science Foundation.

"If there's anything as good as dinosaurs, it's sharks," says Chris Zachow, president of the museum's foundation, adding that, for her, sharks are interesting because she fears them.

"I don't worry about dinosaurs," she says, and lucky for us, there is no need to worry about the Megalodon either."

Admission is free for museum members and schoolteachers with classes. Call the museum at 601-354-7303 or visit http://www.msnaturalscience.org for more details.