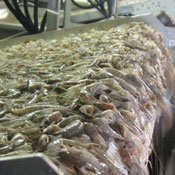 Wally Gollott, owner of the Gulf Pride Seafood Company in Biloxi, leads me to a large metal door at the company's freezer, down the street from where 43,000 pounds of shrimp are being peeled and packed by 30 or so workers.

"Let me show you something," Gollott says, heaving the door open with a grunt and parting a plastic curtain.

We walk into a cold, concrete room about the size of a church sanctuary, our breath now visible in the shrimp freezer. The room itself is sparsely occupied by pallets stacked with boxes of freshly-processed gulf shrimp, stacked three high in one corner of the room. About two-thirds of the room is empty, and a forklift sits in the other corner, about 10 empty pallets stacked on its arms. Unused pallets complement the several dozen barrels of shrimp, which truckers will pick up and deliver to local food distributors all the way to Memphis, and in some cases, to St. Louis and Chicago.

Gollott says that since the oil spill, business has sharply decreased. Gulf Pride normally takes in between $10 million and $14 million in revenue every year. Even though biologists had predicted the 2010 shrimping season to produce a once-in-a-decade bumper crop, Gollott says his company will be lucky to make even $6 million this year, and much of that will depend on imports.

"It probably will shut us down until we're able to secure some shrimp, maybe in Texas," Gollott says with a sigh.

On Saturdays, the plant is usually busier than normal—Gollott is processing 25,000 pounds of Louisiana shrimp still untainted by the expanding oil slick. His colleague, Earl Fayard, president of Ocean Springs Seafood Inc., is processing 18,000 of his own shrimp at the Gulf Pride plant. Even on a comparably prosperous day, Gollott says business has slowed down drastically.

Mississippi's shrimping season officially begins this month, and the 2010 hurricane season is already underway. As of May 27, NOAA has predicted 23 storms of at least tropical strength, and three to seven of those storms could be major hurricanes.

In the meantime, the federal government is urging shrimpers to catch what they can before more fishing zones are closed off due to the oil spewing into the gulf.

"We're getting the last of what's available for a period of time. In the near-term, we're going to run out of shrimp to process," Fayard says. "I don't know what will happen to the company after this. It could be early retirement for me."