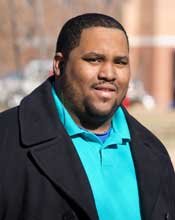 The front door of F. Jones Corner bursts open around 4 a.m. on a Friday, and Timothy Fizer emerges, holding a drunken man's arms behind his back as the man bucks and jerks under the 6-foot-tall, 330-pound bouncer's half-nelson. Instead of fighting the troublemaker, Fizer simply takes the man across the street away from the commotion of the bar and sits on his back until he stops resisting. Fizer leans over to address the subdued partier.

On Thursday nights and weekends, Fizer works from dusk to sunrise at the popular Farish Street hangout. During the day, he's a student at Jackson State University where he is majoring in biology. Fizer schedules his class time around his late-night work schedule.

The young man has been working security at various clubs around Jackson since he was 17, mostly due to his impressive size. He still holds the record for power lifting at Jim Hill High School, where he was captain of the football team.

Fizer finds purpose as a bouncer, he says, keeping weekend partiers safe at the Farish Street club. The Jackson native says the historic neighborhood is one of Jackson's best assets, and will only grow after more businesses open later this year.

"The city of Jackson has progressed in leaps and bounds in the last 10 years," he says. "It has come a long way, and  I'm glad to say I'm a part of it and a part of its future."

As vice president of JSU's NAACP chapter, Fizer works to register voters. He helped the chapter win the NAACP's  national Upload 2 Uplift competition for registering the most new voters on a  college campus.

"Politics don't fail when people take the action," Fizer says. "Whenever the people's voices are heard, things will get done."

After he graduates in December with a bachelor's degree, Fizer plans to dive fully into entrepreneurship and expand Magnolia Air Quality, a company he co-owns. Magnolia provides heating, ventilation and air conditioning system cleanings and energy auditing services.

"We've been in business for about  a year," Fizer says. "I enjoy being my own boss, and I eventually want to help  get someone else a job, and help Jackson grow economically."