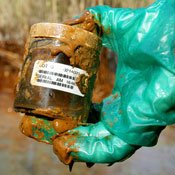 A sample of oil taken by Greenpeace Senior Campaigner Lindsey Allen on the breakwater in the mouth of the Mississippi River where it meets the Gulf of Mexico in Louisiana on May 18.

Problems resulting from the April 20 deadly explosion of a British Petroleum oil rig could be nothing compared to the potential complications.

The phenomenon offers no comparative situation upon which to base destructive potential, according to Woods Hole Oceanographic Institution Biology Department Chairwoman Judy McDowell. You can't compare the devastation, for example, to the destruction from the 1989 breach of the Exxon-Valdez tanker in Alaska's Prince William Sound.

"After the (Valdez) accident you knew how much oil you were dealing with, so the big challenge involved predicting where that oil would move geographically in both space and time," McDowell said. "With this spill, the amount of oil being spilled is unknown."

Another issue to consider is the sheer mobility of the oil, which McDowell said is dispersed throughout the Gulf of Mexico, potentially affecting more area, both inshore and deepwater, making predicting long-term impacts "purely speculative."

Sandra Brooke, coral conservation director for the Marine Conservation Biology Institute of Bellevue, Washington, told the Jackson Free Press this month that by dispersing the oil geyser directly into the water with detergent agents, BP essentially brokered a trade-off on which ecosystems to sacrifice: the shoreline and surface animals vs. deepwater habitats invisible to the human eye.

"… (T)he most well-developed deepwater coral system we know of in the Gulf of Mexico is less than 100 kilometers up the shelf from (the massive leak). Nobody has been considering the effects of that dispersed crap on the real deep-water corals," Brooke said.

Louisiana fishermen are, according to Mississippi Sierra Club Director Louie Miller, furious at the potential implications of oil seeping into the already fading Louisiana wetlands—which were losing an acre an hour to the sea, according to CommonDreams.org.

"Many of them are already out of work and their careers could be over for years. They're kind of in the middle of another Katrina with this."

The Louisiana wetlands along the edge of the water serve as the breeding ground for much of the shrimp and fish industry that makes Louisiana famous. This could be a problem considering the nature of oil to hit the smallest marine life the hardes. Oil spills impact stationary plants and animals, sensitive species and critters in the midst of vulnerable life stages—such as eggs, larvae, and juveniles.

Brooke said free-floating oil in the deepwater area could also spur the growth of oil-devouring bacteria, which could use up considerable oxygen in the Gulf area, spawning bacteria-based dead zones comparable to the algae-based seasonal dead zone already prevalent along the mouth of the Mississippi River courtesy of agricultural run-off.

Facing unsightly oil on the beaches and the possibility of the persistent loss of the fishing and the sport-fishing industry, there is the potential for the veritable death of the coastal-based tourist industry in Louisiana and Mississippi. Even Florida isn't fairing well these days, according to a New York Times article, which describes tourist bookings having dropped 15 percent since April 20, despite the fact that Florida appears to suffer no clear evidence of oily beaches.

The problems with the diving tourism and fishing industry appear to be compounded by the sheer longevity of oil in the environment. Some organisms feed on hydrocarbons, but their cleaning effort stops only a few inches down under the soil in every case study.

"With the West Falmouth spill, which happened in 1969, it took more than a decade for some of the benthic species … in that habitat to return, such as fiddler crabs. But even 40 years later, the fiddler crabs in that area, their burrows will not penetrate beyond the oil layer, and so they have a very shallow burrow which leaves them more prone to predation," McDowell said.

Imagine countless Louisiana crawdad holes, decades from now, still incapable of penetrating the earth 10 centimeters. But there's no sense in thinking of oil's environmental prevalence in terms of years, when you can classify it in terms of geologic cycles. McDowell points out that the oil can persist long enough to enter the fossil record. Millions of years from now some future paleontologist could potentially dig down into the sedimentary rock of an ancient Louisiana coastal swamp and uncover fossil evidence of a layer of oil deposited there courtesy of BP in 2010.