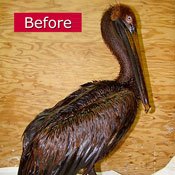 April 22: The above-surface rigging warps with the heat of its fire and collapses into the sea, dragging with it the well pipe, potentially rupturing it in several places. The Coast Guard does not acknowledge leaking oil.

May 2: President Barack Obama visits Venice, La., on his first spill-centered visit. The National Oceanic and Atmospheric Administration bans fishing in a large portion of the Gulf from the Mississippi River outlet to Pensacola, Fla.

May 7: BP lowers a specially constructed oil containment vessel over the main leak

May 8: BP reports that ice crystals prevent the May 7 "cap" from capping the leak.

May 11: BP executives, Transocean executives and Halliburton executives point fingers at one another before Congress for the explosion.

May 13: Congressional investigators determine the rig's blowout preventer had a hydraulic leak and a failed battery.

May 17: BP reports that it is successfully siphoning off a percentage of the massive leak spewing underwater. Congress remains unimpressed.

May 18: NOAA doubles the portion of the Gulf now restricted to fishing. Scientist suspect the actual amount of oil escaping the well to be incalculable.

May 19: Oil enters Gulf "Loop Current," potentially expanding its presence to Florida and beyond.

May 23: U.S. threatens to push aside BP and commandeer well-capping effort

May 24: U.S. government orders BP to use less dispersant, claiming dispersant is too toxic.

May 30: White House energy adviser Carol Browner tells NBC "more oil is leaking into the Gul of Mexico than at any other time in our (nation's) history."

What is missing in this time line and so many seem to be unaware of is where is the Federal governments actual physical response to the spill?? Law, the Oil Pollution Act among them, dictate the President and agencies under his control if neccessary stop this spill and contain it so it doesn't contaminate the Gulf. So far they have been very good at pointing the finger at BP, like none of us would have ever known whose fault it is without their telling. Getting $20 billion from BP,over 4 years,will be inadequate if this spill isn't contained. But it does look good in headlins. President Obama is playing politics with this. http://www.uscg.mil/npfc/About_NPFC/osltf.asp http://www.uscg.mil/npfc/About_NPFC/opa.asp We don't need new laws and new angles, just action on the part of the administration.

What action? What should they do? Be specific.

Its one mile down - below the crush depth of all but a very few manned subs. Short of a Russian solution, ie nuking it, what do you suggest?