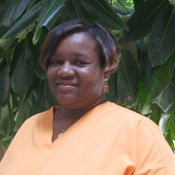 Sandra Peterson Lott is the author of "Temporary Power Outages."

The moment Sandra Peterson Lott sits down with her lunch, I sense her comforting nature. She has an hour-long lunch break from her duties as a pediatric nurse, but she ignores her food to talk about her passion: ministering to children and unwed mothers.

The child of an unwed mother herself, Lott, 43, speaks openly about her difficult youth. She grew up shuffled between her grandparents, mother and father. She did not let her troubled childhood prevent her from pursuing a career in nursing, however. A native of Ludlow, Miss., Lott earned her bachelor's degree in nursing from the University of Mississippi Medical Center in 1998. She completed her master's degree in nursing in 2008 at UMMC. She currently lives in Mendenhall, where she lives with her husband, Edward, and two daughters, Kary, 20 and Mercedes, 18.

Lott recently transformed her life story into "Temporary Power Outages" ($14.99, Authorhouse, 2010) a Christian, inspirational memoir. In the book, she writes about difficult issues throughout her life, such as not meeting her father until she was 10 years old.

"For 10 years, I walked around not knowing who I was," she says. She recalls the discomfort and stress of not knowing exactly where she belonged. She says she hopes her story inspires others.

"It doesn't matter where you come from. You can still be what you want to be," she says.

Lott also teaches children's Sunday school classes at Rose Hill M.B. Church in Mendenhall, always leaving time at the end of the lesson for children to say what's on their minds. She also directs the women's ministry at her church, and recently helped organize a Women's Conference, emphasizing the importance of both spiritual and physical well-being for women.

"Today's woman ... there's more to her than meets the eye," she says. "You should not just be seen and not heard" she says.

Lott wants to widen her ministry, by counseling families who have been victims of crime. She would like to write more books: a sequel to her first and possibly a children's book.

"No matter what goes on in your life, you can still move forward," Lott says.