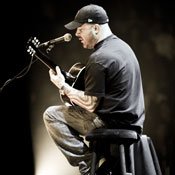 Aaron Lewis of Staind brings his acoustic solo tour to the Ameristar Casino in Vicksburg Thursday and Friday night.

The 20-year freeze has thawed, and it's time to warm up with good drinks and live music. Nothing eases the stir-crazy-winter blues like a live juke session. Whether you're looking for calm acoustics over dinner, or something livelier to get your dancing shoes moving, we've got you covered.

Thursday night, grab a burger at the Cherokee Inn and hear local Americana favorites D'lo Trio at 6:30 p.m., or catch blues-rocker "Big Juv" Brawley of the Juvenators at The Auditorium in Fondren, 7:30-9 p.m. You can still get tickets to see Aaron Lewis of Staind Thursday and Friday nights at the Ameristar Casino in Vicksburg at 8 p.m. Tickets are $40-$50. This solo acoustic tour may not rock the house like a full-fledged Staind gig, but it's been getting great reviews, so it should be a treat for fans.

Widespread Panic fans should check out the return of Jerry Joseph of Jackmormons/Stockholm Syndrome fame to Martin's Friday night, 10 p.m. Jerry's Stockholm Syndrome project includes members of Widespread and Gov't Mule. Even though this is a solo show, Jerry is quite the accomplished guitarist, so it'll still be a throw down.

The quintessential Mississippi queen of jazz, Rhonda Richmond, will perform a free show at Hal & Mal's Friday night. Also on Friday, The Quills are back by popular demand with Redmouth at Ole Tavern starting up at 10 p.m. Then kicking things into the late, late night is Jesse Robinson & the 500 lb. Blues Band at F. Jones Corner from  11:30 p.m.-4 a.m.

Saturday night holds a variety of musical options. Classical fans of Tchaikovsky will want to catch the Mississippi Symphony Orchestra's Bravo III concert at Thalia Mara Hall, starting at 7:30 p.m. $20+. The symphony will feature "Swan Lake," the "1812 Overture" and the "Sixth Symphony." Be sure to catch the pre-concert lecture on the hall's mezzanine level from 6:45-7:15 p.m. Visit msorchestra.com or call 601-960-1565 for tickets.

If you're thinking the symphony isn't the place to get your freak scene on, then check out Silver Tongue Devil at Fire or the aristo-crunk amphetamine rush of Lord T & Eloise at Martin's Saturday night. The hip-hop stylings of Kamikaze and Yard Boy returns to Cultural Expressions Saturday night, 9 p.m. $5. Or, if you're ready for a road trip, Los Lobos is in the beautiful MSU Riley Center in Meridian Saturday night, $33-$39. Call 601-696-2200 for tickets.

Speaking of bigger concerts, alt-rockers Sister Hazel return to Fire next Wednesday, Jan. 27, 9 p.m. They're touring for their seventh studio album, "Release," that dropped back in August. Also, if you can take a half-day off next Wednesday, be sure to head to the Lyric in Oxford for Gov't Mule. Neither option is a bad way to get through hump day.

Next Friday, Jan. 29, is the long-anticipated Mississippi Opera "Voice of the Century" concert with Renee Fleming at Thalia Mara Hall. Reserved seating tickets are $39-$129 to hear the world-renowned award-winning soprano. If you want good seats, don't wait. Call 877-MS-OPERA or visit msopera.org. And see reneefleming.com for more info.

The concert of the fortnight for any fan of R&B and blue-eyed soul is Robin Thicke at Thalia Mara Hall next Saturday, Jan. 30, 8 p.m. $35-$45. The three time Grammy-winning songwriter, with his cross-genre appeal, makes this one of the biggest concerts that Jackson has seen for some time. You probably know his singles, "Dreamworld" and "Lost Without U." Check him out at robinthicke.com.

Plan now for a road trip later. Fiery Furnaces is at One Eyed Jack's in New Orleans Jan. 30. The Residents will be at the Memphis Hi-Tone Feb. 4. The Black Eyed Peas and Tortoise are in Birmingham Feb. 13. Also, The Lyric in Oxford has good gigs lined up with G Love Feb. 3, RJD2 Feb. 10, Bela Fleck Feb. 11 and Dark Star Orchestra Feb. 25. Spoon is in New Orleans March 18 and in Birmingham March 19.