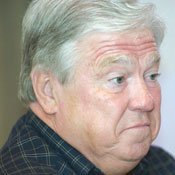 Gov. Haley Barbour heads to Chicago today, where he will outline his own plan for national economic policies.

Gov. Haley Barbour is speaking out against a bill the Mississippi House of Representatives passed yesterday, which exempts budgets of certain state agencies from reduction when state revenues fall below revenue estimates. HB 392 also restricts cuts to agencies beyond projected budget shortfalls.

The bill grants the state fiscal officer the power to reduce allocations of general funds to agencies "in an amount necessary to keep expenditures within the sum of actual general fund receipts." That amount, according to the bill, happens to include any transfers to the general fund from the Working Cash-Stabilization Reserve, otherwise known as the Rainy Day Fund. That section of the law calls for the governor to increase his use of the Rainy Day Fund to shore up the budget, beyond the $78 million he has already authorized.

Barbour is not willing to tap the fund to that degree, however, arguing that the fund will not last a projected three years at that rate of depletion.

"The House bill is unacceptable," Barbour said in a statement. "The most glaring problem is the House's use of another $50 million in this fiscal year. The Rainy Day Fund must last three years because we know that severe revenue shortfalls will last at least that long. If this is all the House is going to do to meet our constitutional requirement to balance the budget, then I'll make cuts under existing law this week."

This response puts Barbour in the position to act upon a threat he issued during his Monday State-of-the-State speech to cut every agency evenly across the board. Barbour asked legislators to give him the power to cut agencies up to 10 percent of their budget this year, to meet projected shortfalls, but the governor is only allowed by state law to cut up to 5 percent of agencies indiscriminately. Any cut beyond the 5 percent mark must be a blanket cut administered to all agencies, but Barbour warned that cutting the Department of Corrections budget to that degree would result in the release of prisoners to the streets.

The governor threatened in his Monday to release prisoners if the House did not fork over the power, explaining that the blanket cut would hobble the corrections department.

"An 8.1 percent cut (to Corrections) would equal nearly $26 million. To make such a cut for the rest of this fiscal year would require 3,400 to 4,000 convicts to be let out of prison: 3,400 to 4,000 convicts, who are not approved for parole, have not gone through pre-release preparation or training and for whom there are very, very few jobs," Barbour said. "I can't believe anyone  would vote to turn 3,400 to 4,000 convicts loose onto civil society, on to the public. That is the most glaring reason the Senate bill needs to be passed."

He asked legislators to change state law to allow him more cutting power, and the Republican-dominated Senate immediately complied this month by submitting a bill allowing just that. But the House is not so quick to surrender more budgeting power to the executive branch, despite the sunset provision in the Senate bill.

"We support HB 392, because education, as well as other state services would be cut less under the house bill," Loome told the Jackson Free Press.