Saints: Deuce. Is. Back. 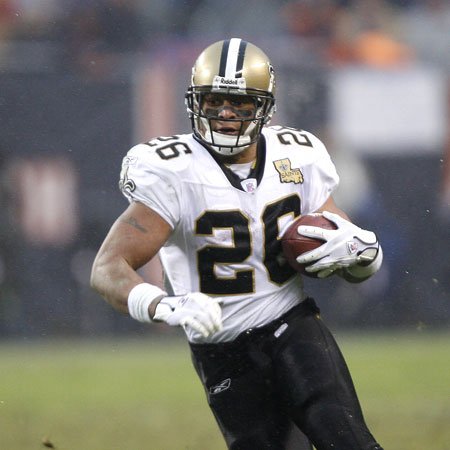 Coming back from two serious knee injuries in the last three seasons, Deuce McAllister says not to count him out, yet. Photo by Courtesy New Orleans Saints

Maybe it won't matter. It may be tough for him to be a factor as a player, particularly with so little practice time with the team this late in the season.

It was just a little earlier in this season that I began to wonder -- and, perhaps, hope, particularly after seeing Mike McKenzie rejoin the Saints for a time -- that Deuce would be re-signed by his franchise team, particularly given how much Deuce means to New Orleans... and Jackson.

And I hoped against hope (prayed? are you allowed to pray for such a thing?) that it could be this season, where the Saints appear to have their best chance for a SuperBowl yet.

So here's the news when I get back from lunch today: WDSU in New Orleans is reporting that Deuce McAllister has been re-signed by the Saints and practiced with the team on Friday in anticipation of Saturday's playoff game in Arizona.

It's not clear yet whether McAllister will play in Saturday's game...but BOY would I like to be in that stadium when he's announced over the loudspeaker.

From the Saints press release regarding McAllister (emphasis mine): “Deuce McAllister has always embodied the spirit of the New Orleans Saints and the city of New Orleans,” said Saints Head Coach Sean Payton. “We’re excited to have him back with the team and to have him lead us out on to the field tomorrow.” McAllister started both playoff games for the Saints in the 2006 season, running for 161 yards in the two contests and scoring touchdowns rushing and receiving in the Divisional round victory over Philadelphia. “I’m speechless,” said McAllister of re-joining the team. “I don’t know that there are words to describe this feeling. I do know that we have some unfinished business that we started a few years ago and we want to finish the deal.” I have no idea what Deuce's conditioning is or his health. But he's only 31 years old, he's one of the most popular players in the South and he's a damn good pass blocker, if nothing else. In his prime he could bulldog for yardage, move the pile, catch passes out of the backfield and even leap for goal-line touchdowns. But whether or not he does any of that on Saturday, the question remains -- did Payton do this on purpose? Right now? To motivate his team? To put everyone on edge? It's almost like he knows something about this Saints team that seems to be true from watching them all year -- they play their best when every week is a SuperBowl. This announcement just put the emotion in the game for Saints fans and many of the players on a totally new level -- and it was already at about 120 decibels.

T-P is reporting that Deuce will not play on Saturday and that he'll technically be inactive. He'll serve as the team captain and lead the team on to the field. So, in other words, he *definitely* won't be a factor; it sounds like he'd been offered the role of honorary captain at one point and ownership decided that he could actually be official, on the roster, thanks to the injury to a backup defensive lineman. So, he'll be paid for getting the fans and the team fired up... and he could conceivably be activated for the NFC Championship Game if the Saints get that far. I wouldn't be surprised to learn that the Saints, after this season, hire Deuce as a coach or as a consultant because he is so popular in LA and MS and could be great for younger backs. I guess it'll depend on where he decides he is in his career, if he thinks anyone else will pick him up. (And/or if the Saints will actually let him play again.) Very classy move by Saints brass, even if it is a cold splash of water on the notion that he might be fully *back* and ready to play.

Injury reports are in and the verdict is that the Saints are about as healthy as they've been all year, with Charles Grant (out) and Pierre Thomas (questionable; ribs) as the noticeable exceptions. So take injuries off the table for this game. This one is all about (1.) plan, (2.) execution and (3.) heart.

Is this an act of desperation or is it payment to Deuce for all of his hard work in the past when the Saints were terrible, yet he was a bright light? Either way I'm happy about it. I don't really trust Reggie Kardashin anyway with everything on the line. Reggie does too much dancing for my taste. I want his ass getting up the field not merely across it, which doesn't count for anything. I hope the Saints win in order to shake themselves from the curse of the Cowboys. I likewise hope the Cowboys get the hell beat out of them. I'd rather see the Bin Laden Bomb Throwers win the Super Bowl than the Cowboys, America's so-called team. Everybody knows the Pittsburg Steelers is America's real team.

I like the move. OK it is just an honourary role but it shows the management respect what a big role he played in years gone by and what he can still bring personality wise to the organization. Given the Saints injury news of recent weeks it can't hurt to have him in reserve just in case. I mean surely he still has enough in the tank to make a goal line drive should Bell or Hamilton ever be out in the coming weeks. Suit him up and let him sit in the pads one more time at least.