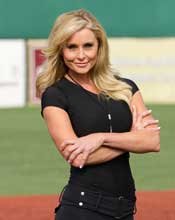 In between shuffling her 9-year-old son home from school and making last-minute calls to plan a charity event at the Mississippi Children's Home Services, Pamela Nail stops to reflect about her passion to inspire and motivate others.

It's tiny steps your whole life that you take in a certain direction," she says. "As long as you can, you have to see a goal, and you have to keep desiring (to see) that goal happening and not give in to any doubt."

The Crawfordsville, Ind., native grew up in Baton Rouge, La., and at 15, realized she had a gift for helping friends at her gym who asked for fitness tips. In high school, the 5-foot-9-inch teenager got her certification in aerobics and pursued modeling. In 1983, she won the title of Miss Louisiana. After moving to Jackson in 1985 to be with her husband, Steve, she competed and won the title of Mrs. Mississippi, going on to win the title of Mrs. America in 1987. Nail then headed to Brisbane, Australia, where she rose to the top of the national and international pageant world when she became the first American to win the Mrs. World crown in 1988.

Nail, who is in her mid 40s, grew up as the youngest of six children. Her mother was a Holocaust survivor from Poland who immigrated to the United States at 17 where she met her husband. A battle with bulimia spurred Nail's desire to help others acquire high self-esteem and good health. She previously operated her own modeling school in Louisiana, and currently runs her fitness training and pageant-consulting business, Transformations.

The mother of four is planning a boot-camp program along with former NFL football player Jimmy Smith in January. She says good health goes beyond diets or a one-time workout program: It's a lifestyle choice.

In her free time, Nail leads workshops for young girls at the Mississippi Children's Home Services, where she teaches life skills and nutrition.

"They learn from us what they might not learn anywhere else," she says. "We have an open window where we can go in and change lives. I tell them about how I grew up, and how it's important to make the right choices because that will determine exactly who you will be.

After living in the city for more than two decades, Nail says she considers Jackson home. "There are so many things I like about Jackson. I love my friends. People in Jackson aren't transient. They have been here and have roots here. ... I love that camaraderie with other people."