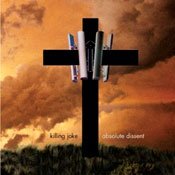 Cause for rejoice and revelry is here at last, for the faithful and neophyte alike. Killing Joke has released "Absolute Dissent," a snarling, feral beast of a record that manages to take elements from their various incarnations as post-punk rabble rousers, industrial pioneers, doom-and-gloom synth-rock alchemists and roaring metallic juggernauts, and dump the precise amounts from each into a thick, sludgy production to deliver an album that is much more than the sum of those parts.

Longtime listeners of the band will instantly find themselves in familiar territory and hear references to entire albums past in certain songs. But considering the integration of key sonic ingredients, it stands as an excellent intro point for the uninitiated as well. Laced with Orwellian overtones and references to the natural and the supernatural, this is an album to play while reading conspiracy theories and waiting for whatever 2011 might bring.

The record opens with the title track, a bombastic lead that reads like a shopping list of the world's ills and a call for action, an unrelenting wallop of guitar-bass-drums over singer Jaz Coleman's distinctive vocals, which can move from a soaring howl to a guttural bellow and back again with ease.

The lion's share of "Absolue Dissent" follows similar themes throughout, indicting among others (and you might want to pull up Wikipedia for some of these): Monsanto Seed Corporation, the Codex Alimentarius, population control, the surveillance state, Thomas Malthus, vaccinations, European politics, the singularity, Big Pharma, freedom and the seductive power of money, just to name a few.

Spanning 12 songs that don't let up in lyrical or instrumental urgency—even in the quieter moments of "The Raven King" as it wistfully ponders where the revolutionaries of tomorrow will come from or in the haunted lament of local gentrification evident in "The Ghosts of Ladbroke Grove"—this album is not intended for those who choose to be spoon-fed disposable hit after hit. But you will still find instances of pop swirling amongst the din.

The closest thing to a single you're likely to hear is "European Super State," a dystopian view of European policy that highlights some of the more danceable facets of Killing Joke's sound, not exactly what you expect to hear on Top 40 stations. Then again, most groups don't write about genetically modified crops or sustainable world populations, either. Factor in the surprisingly optimistic "In Excelsis" and "Honour the Fire," two tracks that exhort the value of life and liberty as a balance to the raging defiance displayed elsewhere.

"Here Comes the Singularity" and "The Great Cull" maintain the full-speed approach, while bassist Martin "Youth" Glover's rubbery bass lines recall some of their work in the mid-1980s. It's that throbbing unity of bass and drums that unifies every Killing Joke album and "Absolute Dissent" is no exception. It's a klaxon blare of thought-provoking music from a band that has been moving towards this point for thirty loud years.