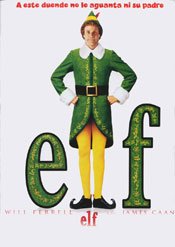 The holidays are upon us. Thanksgiving is past, and Christmas is coming up faster than a speeding sleigh. When you need a moment away from the maddening traffic and endless lines, try popping one of these movies in your DVD player for a breather. It's a mixed bag of Yuletide mayhem, some slightly more obvious than others, but all guaranteed to take your mind off shopping and wrapping and socializing.

"Elf" (2003)—Before slipping into sports-movie parody territory, Will Ferrell made this goofy comedy about a normal human named Buddy reared at the North Pole by Santa's elves. Sent into the normal world to find his real father, Buddy becomes the quintessential fish out of water. Naïve to a fault, Buddy manages to find himself repeatedly at the bottom of life's pitfalls as he searches for his dad. James Caan, not known as the bubbliest guy in Hollywood, is pitch-perfect as Buddy's brick wall of a father, and Ferrell inhabits the concept of the overgrown child as if it was his daily existence. His scenes with diminutive actor Peter Dinklage are priceless. Balancing out Caan's edginess and Ferrell's goofiness are Mary Steenburgen as Emily, Walter's sweetheart of a wife who insists they take Buddy in, and Zooey Deschanel as Jovie, Buddy's shy love interest. While the concept is fluff, performances are first rate.

"Trading Places" (1983)—Dan Aykroyd plays Louis Winthorpe III, employed by commodities brokers Mortimer and Randolph Duke, played by Don Ameche and Ralph Bellamy. During the holiday season, they wager one dollar that they can switch Winthorpe's soft, posh socialite life with that of street-wise con man Billy Ray Valentine, played by Eddie Murphy. Throw in Jamie Lee Curtis as Ophelia, the proverbial hooker with a heart of gold, helping Winthorpe get back what is rightfully his, and some payback for the gentlemen who put all this in motion and you've got the makings of a hilarious '80s Christmas comedy directed by John Landis. Murphy and Ackroyd are at their best playing off old-guard comedians Ameche and Bellamy.

"The Children" (2008)—"The Children" is for grown-ups only, especially those who need a break from too much holiday cheer. In the English countryside during Christmas, a particularly nasty virus is circulating among the children of three couples. Any child with a cold is fussy and irritable, but the virus elevates discomfort to ridiculous heights. An unfortunate side effect is homicidal behavior. As the illness spreads without much notice from adults, sniffles and fever become a frightening affliction. What first appears to be a few horrid accidents are revealed as the work of some decidedly "naughty list" kids. Watch as a quiet holiday gets turned into a nightmarish fight for survival against the least expected of predators. This is not the kind of thing one expects at Christmas, especially when what you are trying to get away from is your own murderously intentioned offspring. Do not offer them a chance to go sleighing; they'll misinterpret that.