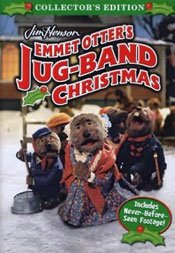 "Emmet Otter's Jug Band Christmas" (1977)—Jim Henson had the Christmas season covered with "The Muppet Christmas Carol," but this little tale is perhaps the most overlooked gem in Henson's treasure trove. The tale of an otter mother and son and his jug band buddies as they all struggle to make some spending money for Christmas debuted in 1977. I remember watching this with my younger siblings and enjoying it immensely, especially the bands' rival at the talent show: the intimidating Alice Cooper-styled Riverbottom Nightmare Band. The special is filled with memorable songs that are uplifting and sweet without being saccharine. This was also the first time Henson filmed his creations in wide-angle and full-character shots; previously Muppets were almost exclusively shot from the waist-up. If you haven't seen it in years, or if you have children who have never seen it, this is the perfect time to settle in at the edge of Frogtown for a bittersweet modern holiday classic.

"Die Hard" 1 and 2 (1988 and 1990)—Say what you will about Bruce Willis and this franchise, but they take place during the Christmas season—both of them. Willis' John McClane just wants to be nice and spend the holiday mending his relationship with his family. You have to forgive him when he goes a little "Yippee Ki Yay" on the not-so-nice band of "terrorists" in the first movie. You'd think that would be the worst Christmas ever. But wait, another Christmas rolls around, another flight to bring the family together, and as a special gift there is a group of mercenaries led by the great character-actor William Sadler, trying to free an extradited drug lord flying in to the same airport. Holiday mayhem ensues with McClane outnumbered, outgunned and improvising to save the wife and kids, bring down the bad guys and save Christmas, yet again. Maybe next year a quiet holiday at home is the way to go.