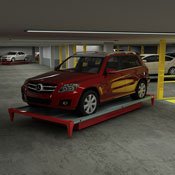 The Jackson Development Authority may have half ownership of Old Capitol Green's planned parking garage and mixed-use development in Jackson.

An automated parking garage with robot valets is one of the features of a $27 million proposed parking structure and communal air-conditioning unit to accommodate the $1.3 billion Old Capitol Green development in downtown Jackson.

JRA members voted to form a funding strategy with Capitol Green developers Full Spectrum South, which will include state and federal tax credits, Gulf Opportunity Zone bonds and a potential co-ownership with JRA. The funding plan must be executed quickly, as GO Zone bonds expire on Dec. 31, 2010.

The garage itself will reduce street parking by 50 percent and make the Old Capitol Green more pedestrian-friendly. The parking garage estimated cost is $21.3 million and the cooling system another $5.3 million. The garage and central air conditioning unit would serve multiple buildings, and will form the backbone of the greater 50-acre development that stretches the length of State Street crossing Court and Pascagoula Streets.

If the loan comes from the state, it could have a 20-year lifespan. Senate Bill 3281, which allows Full Spectrum to borrow $20 million, sets a 20-year term. If the loan comes from the JRA, Shepherd said the company would prefer to have the maximum term available, which could be up to 30 years. Both the garage and the cooling system will draw revenue from a multitude of residential and commercial residents who use them, and ownership of the garage could fall to the JRA after seven years.

The idea of letting robots move a person's car may initially feel unsettling, but the parking garage fits in with the development's goal of saving electricity and space, Jagoda said. Boomerang's multitude of robotic valets look like a tribe of red pancakes. They can reach underneath a vehicle and pick it up--turning up to 360 degrees--and carry it down a narrow lane into a parking space. The majority of the robot-occupied parking garage will be unlit to save electricity.

"It takes about two minutes for the robots to go and get your car back," Jagoda said, describing a process similar to getting a can of Coke from a vending machine receptacle.

JRA member John Reeves, a former state representative for Jackson, said he was eager to get the process moving. He voted in accordance with other JRA members to dedicate attorneys and accountants to work with Full Spectrum to devise a $20 million bond and payment plan.

"I was impressed with the Full Spectrum presentation, and I'm excited to see this project finally turn dirt," Reeves told the Jackson Free Press. "I voted in favor of the project while I was in the Legislature, and I've been optimistic that something would happen, and this is wonderful."

The Jackson Redevelopment Authority is a quasi-governmental entity created by the city of Jackson to deal with economic development issues primarily dealing with properties. The JRA dedicates itself to acquiring; leasing and selling property, and can float bonds to finance renovation and development, city spokesman Chris Mims said.

"I was impressed with the Full Spectrum presentation, and I'm excited to see this project finally turn dirt," Has this project broken ground? Just curious. - Neil

An interesting concept with some interesting numbers. The parking garage costs $21.3 million and the cooling system another $5.3 million. With 806 parking spaces, the initial cost is $26,400 per space for the garage or $33,000 per space if you add in the cooling system. Suppose all 806 spaces generated $200 of revenue month after month, year after year, in good economic times and bad. That's just under $2,000,000 of revenue per year. Maybe my estimate is way too low, but it seems like it would take a long time to pay off this investment once the yearly operating fees were added into the mix. Of course, there are the intangibles of what a major parking garage would mean to the area, etc. I'm just throwing out some numbers as a way of thinking about cost effectiveness. I'm also curious about that 2 minutes to retrieve a car. Suppose a big show has ended or a popular bar has just closed and 20-30 people show up for their cars at the same time. Still 2 minutes, or does it become 10? I hope that question was raised during the presentation and maybe someone knows if high volume would make a significant difference in retrieval time. Late at night, a 2 minute wait would seem long--a 10 minute wait would be an eternity. Some of you are bound to have a better grip on the financial pros and cons of an investment like this and I hope those of you with that type of financial expertise will add a few comments.

Has this project broken ground? Just curious. Construction is expected to start around the end of the year or very early next year.

Frank, you are correct at this costing $26,000/parking spot. A normal parking garage can be built for $12-16,000 per spot. Not to mention your questions about the time to retrieve cars if a crowd shows up at the same time. But I'm still very supportive of the overall project and I hope it goes well.

Just watched their online video; apparently each garage has multiple bays where cars can arrive, so if there are 10 bays then 10 cars could be retrieved (theoretically) in each two minute interval, or call it 50 cars moved in 10 minutes. http://www.youtube.com/watch?v=IkrK54XdLis Also there is supposedly a SMS/text or call-ahead feature where you can have the car brought down while you're on your to the garage. (Presumably they would charge you more if you left it sitting in a bay?) That could be cool. ;-)

This should be a hoot! Ever put a dollar in a soda machine and have the can get stuck leaving you thirsty and frustrated? At some point, all machinery breaks and is out of service waiting on parts. For most people, a car is a necessity. Having one trapped in the automated garage would be a major inconvenience.

Are there any examples of where this system is working? What happens if all 800 (say like at rush hour) decide they want to leave the parking garage? And, what happens if there is a power outage? Is there a backup system so all 800 cars don't get stranded? I can imagine a Katrine-type system knocking out the power and not being able to get my car to get home. That kind of scares me. I'm sure Mr. Brown has simple answers to these questions, though. I'm just curious.

That's a good question to ask. I'm not familiar these kinds of garages and thus never seen this type of technology. But I wouldn't think the developers would include this if it didn't work elsewhere. Hopefully, someone who's affiliated with Old Capitol Green in some capacity will come on here or other media to explain and answer questions.

From my understanding, there is not an example of this 'auto garage' in the US - this would be the first in America. Maybe there are some in Europe or Asia.

So, Mississippi could be first in something innovative.

The City Centre Parking garage across from the city auditorium is a nice size parking garage. From what I can find on the internet, it has 517 spaces. With this proposed parking garage being about 60% greater capacity, I guess we would be counting on the concept of "build it and they will come". This following website may be totally wrong, but it says that the City Centre Parking facility has annual revenues of $500,000 to $1,000,000: http://www.manta.com/c/mmcf4pc/city-center-garage Suppose you get the high end of that revenue estimate, $2,000 per space for all 806 spaces. The cost of the building, the upkeep, the various operating expenses--even with the high end estimate of revenue, this things sounds like a clear money loser. Maybe an acceptable money loser if it can come close to meeting the building and operating cost, but my gut feeling is that this thing is going to be a financial disaster. That's just my opinion and I hope it's wrong.

i'd rather hear directly from the developers. What say you, Carlton?

Hopefully, someone who's affiliated with Old Capitol Green in some capacity will come on here or other media to explain and answer questions. I wrote this not realizing Mr. Brown had already posted. However, I'd still like to get a better feel on how the garage would work.