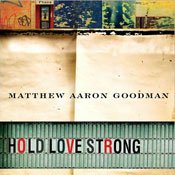 In the opening paragraphs of Matthew Aaron Goodman's debut novel "Hold Love Strong" (Simon and Schuster, 2010, $24.99), Abraham, the novel's protagonist, tells the story of his birth. His mother, 13-year-old Angela, or "Jelly," is lying naked on the bathroom floor.

"My mother quaked with another contraction and she moaned and rolled her head from side to side as if her neck and spine were suddenly severed. Then she stopped and looked down at the round mound of her belly, her eyes so wide it seemed she was surprised by the sight," Goodman writes.

"She put her hands on it, and with her fingers spread as wide as they could stretch, my mother began to weep. But it was not weeping caused by physical pain, or by ignorance, or even a weeping caused by fear. My mother wept because although she was still a child she had enough sense to understand that she was not prepared to shape my life. She couldn't multiply or divide. She didn't know north, south, east, or west. She couldn't tell time on a regular clock. This is not to say she was dumb. In fact, my mother was brilliant, so smart she could remember all of the words in a song after hearing it just once. What my mother was then was the product of low expectations. She had been failed so she had failed. And yet, social promotion: she had just graduated the seventh grade."

It's 1982 in Ever Park, an African American neighborhood in the borough of Queens, N.Y. Crack, AIDS and hip-hop are taking over the streets along with young men's and women's lives. Abraham's 20-year-old father James is nowhere to be found. Angela didn't want a baby; she just wanted a man in her life because growing up she didn't have that.

Goodman deftly brings readers into a world where no one knows if he or she will live to see the next day. People are fighting and killing for drugs or being hauled off to prison because of committing atrocious crimes.

"How did AIDS spread? Where did crack come from? What, who, if anything and anyone, was safe? In Ever, brothers and sisters were fish and dying was the H, the 2, and the O of our lives. So what did we do? We did what anyone would do," Goodman writes. "We breathed in dying and lived in dying as if dying and the baggage that came with dying were normal, like everywhere in the world mama stole from grandma and sold her pussy in the stairwell to get high."

Angela abandons her motherly duties for crack and sex. Nothing is constant in Abraham's life, as he loses loved ones to gunshots, prisons and drugs. To escape the real world, he dreams big on the basketball court. He proves to be an observant young man watching the moves of the seasoned older players on the court and, after school, mimics their moves for hours a day. He finds discipline while playing, dribbling the ball with blood dripping from his fingertips. Abraham is a boy trapped in a whirlwind of death and despair trying to find a way out.

He idolizes his teenage uncle, Donnel, who, at a mere 5 years old, took his mother's place:

"The bond Donnel and I had, the bond he was unconsciously but purposefully building was, in its essence, the fundamental mooring and foundation of my family. We were not grandmother, daughters, sisters, or sons. We were not uncle, aunts, and cousins. We were brothers," Goodman writes. "Our love was unwavering, unflappable, greater than anything presented by the Bible, the Torah, and the Qur'an combined."

Donnel grows up well-liked, popular in school and a legend on the community basketball court. Abraham knows that his uncle's basketball skills are going to help the family escape this drug- and murder-infested community. But the idol image comes crashing down like a mirror smashed by a crack addict going through withdrawal.

Abraham continues to find solace in the game and in the family of brothers on the court, brothers experiencing the same challenges, choices and dilemmas. They join together finding relief from the strain of their dysfunctional, abusive and drug-filled homes.

Deciding between his family and doing what he must to become the man he wants to be is a difficult choice for Abraham. Should he follow his family's footsteps or stay focused in school and go to college? Will his family continue to love him if he goes the "white man's way"? As he struggles with his choices, guilt overwhelms him: He does not know if he deserves to have a better life. His cousins are dropouts. His aunt, uncle, mom and grandmother never had the chance to go to college, so why should he?

Amid the chaos, Abraham finds ways to keep his dreams alive, avoiding the dark pit that has pulled numerous family generations into a death trap.

"Hold Love Strong" examines how we attach ourselves to anything that offers a glimmer of hope. It's hope that gets us through when all else fails, even when it comes to breaking the reality of generations. Abraham is destined for drugs, jail and the streets because not one of his relatives made it out of the cycle. Ultimately, this is a powerful story of the triumph of Abraham's all-too-human spirit.