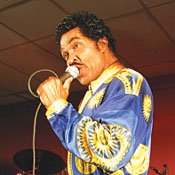 There is something about October that just screams road trip in my mind. Perhaps it's the annual Voodoo Music Festival in New Orleans each Halloween. This week, R&B Grammy Award winning diva India.Arie performs at the MSU Riley Center over in Meridian Thursday at 7:30 p.m.. There are plenty of tickets available, and you'll be back in bed before it's late. Tickets are available at http://msurileycenter.com or 601-696-2200. Check out the JFP music blog online if you missed our interview with Aria in last week's issue. Also Thursday night, Cowboy Mouth will be at the State Theatre in Starkville.

If alternative is your scene, then New Orleans is ideal for an extended weekend. Electro-rocker's Phoenix kick things off at Tipitina's Thursday night, followed by British dance-floor-rock quartet Arctic Monkeys at House of Blues Friday night. The Dead Weather, side project of Jack White of White Stripes and Dean Fertita from Queens of the Stone Age, will also play at the House of Blues. If that isn't enough, experimental folk outfit Blitzen Trapper plays One Eyed Jack's Sunday night. But if you can't make it to New Orleans this weekend, just hold out for Voodoo Fest Oct. 30 through Nov. 1, with Flaming Lips, Jane's Addiction, Fischerspooner, Justice, Silversun Pickups and more. If you want to break the festival scene on Oct. 31, hit up British electropop icons Hot Chip at the Republic inNew Orleans.

For regional day-trippers, try seeing Wavves in Oxford Oct. 6, the Allman Brothers and Widespread Panic in Birmingham Oct. 9 and 10. Wilco is at the Memphis Orpheum Oct. 10 and Alice Cooper at Beau Rivage in Biloxi the same night. Alice has gotten a lot of press this tour, being as rowdy and evil as ever.

If you haven't gotten your Kings of Leon/White Lies tickets for Birmingham Oct. 15, you better do it quick. The next night in Birmingham Oct. 16 is Creed. Roger Daltrey of the Who will perform at Hard Rock Casino, Biloxi Oct. 24, Ween at the Lyric in Oxford Oct. 29, and Lenny Kravitz at Harrah's Casino in Tunica Oct. 30. The Lyric in Oxford continues to score with Son Volt tickets on sale now for Nov. 7.

For those staying closer to home this weekend, it's a good time to try out the new Underground 119 club downtown with the Raphael Semmes Jazz Quartet on Thursday night and the King Edward Blues Band Friday. This Friday evening, starting at 5:30 p.m. and Saturday from 1 p.m., the 930 Blues Café is putting on the first (soon to be annual) Autumn n' Blues Street Festival on Congress Street. Friday night admission of $25 gets you in to see Bobby Rush, Michael Burks, Jackie Bell and the 930 house band. Saturday admission is $15 and will feature Dennis Fountain, Dr. Dee, Bernard Jenkins, Keeshea Pratt, Jackie Bell, the 930 house band and Michael Burks. Find out more at autumnandbluesfestival.com. Next Wed., Oct. 7, Cross Canadian Ragweed is at Fire, $25 at the door.

It's not fall in Mississippi until the annual state fair and a chicken-on-a-stick. This year the fair runs Oct. 7-18. Tickets for the fair concerts are $5 each, which does not include the $5 fair gate admission or parking. Saving Abel and Tabby Porter perform Oct. 7, Styx on Oct. 8, Craig Morgan Friday, Oct. 9.

This incarnation of CCR does not have frontman John Fogerty in the group, but it does have two of the four original Creedence Clearwater Revival members.