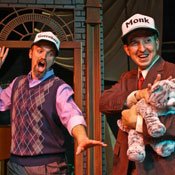 This weekend is your last chance to catch the hilariously irreverent "Gutenberg! The Musical," with Turner Crumbley (left) and Danny Dauphin.

Imagine a musical in Germany, and you might envision a singing, lederhosen-clad family and their nanny, gallivanting around the hillsides, dodging Nazi persecution. Doug and Bud, the central characters of New Stage Theatre's production of "Gutenberg! The Musical," would say you're overlooking a key figure in history: Johann Gutenberg, inventor of the printing press.

Fanatics of the German wine-maker turned printing innovator may be disappointed when they discover the play actually centers around Doug and Bud attempting to sell their musical to any Broadway producers in the audience. Rather than seeing a full-scale musical epic about Gutenberg and his detractors, the audience watches as Doug and Bud perform the full-length, multi-character show with the cunning use of hats with character names printed on them to indicate different roles. Along the way, the characters share the personal meaning the night has for them, and their high hopes for taking their production to Broadway.

While listening to songs about jelly beans mistaken for a baby's medicine, a haunted German wood, getting drunk from words or eating dreams, one can't help think about how absurd the play-within-the-play is, and at the same time, how enjoyable New Stage's season-opener is, keeping the laughs coming from beginning to finish. The minimal set and props (the highlights are a couple of cardboard boxes and a stuffed cat) only serve to showcase Danny Dauphin's and Turner Crumbley's brilliant comedic timing. Normally, theatre fans would want to avoid an awkward, low-budget production, but seeing this play is more than worth the price of admission.