What a Wonderful Film? 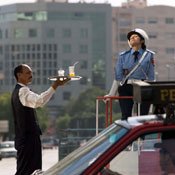 With Casablanca as a backdrop for this tangled web of shady ladies, traffic violations and contract killings, "What a Wonderful World" tells the story of Souad the prostitute, Kenza the traffic cop and Kamel the hit man. Kenza and Souad are friends, and it's through this friendship that Kenza meets Kamel, with whom she falls in love. Their attraction is obviously wrought with problems due to Kenza being a police officer, albeit with the tame assignment of directing traffic, and Kamel being an assassin getting his assignments through the Internet. When a hacker discovers Kamel's identity, the difficulty of their relationship reaches a breaking point.

Moroccan actor/director Faouzi Bensaïdi provides a number of sometimes-stunning shots, such as a scene when Kenza, the traffic cop, appears to be going through the motions of day-to-day life, directing traffic at an intersection, with buses, trucks, and pedestrians performing seemingly choreographed movements and then returning to normal. This scene especially caught my eye, looking as if it were shot with a tilt-shift lens, making everyone seem like they were miniature models and not real-life objects or people.

With some scenes making me think Quentin Tarantino had a hand in this film, Bensaïdi kept my interest for a few moments, but those moments were few and far between in this hour-and-a-half-long movie. The sparse dialogue made it difficult to understand the complex story line. What I appreciated in this movie was a different style of film and storytelling, and for that, it is worth checking out.

The Crossroads Film Society screens "What a Wonderful World" Nov. 5 at the Mississippi Museum of Art at 6:30 p.m. along with the Brazilian Film "MUTUM." The Global Lens Series is a part of the Global Film Initiative.