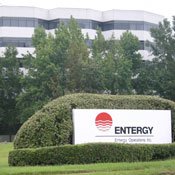 Entergy is continuing to move its personnel to the Echelon Business Park, along Interstate 220 this year.

Downtown Jackson Partners President Ben Allen said the city of Jackson will certainly feel the benefit of Entergy's decision to move about 200 transmission workers from New Orleans to the Jackson area. The relocated workers are currently at Entergy Mississippi's downtown Jackson offices, though they will eventually be housed in an 83,400-square-foot, three-story building under construction at Echelon Business Park, off Interstate 220. The new construction is near West County Line Road, and was funded in part by a state incentive package containing property-tax abatements and $30 million in bonds issued by the Mississippi Business Finance Corp. for Entergy Services Inc.

"Anytime you're adding to the payroll in the city, you're adding disposal income and tax revenue generated by the increase of those dollars," Allen said. "This is totally a plus for Jackson. And it helps our whole community when these types of professionals move into our communitythey get involved in our community, and they make a difference."

Entergy Corp. announced the transfer in August as part of a long-term plan to decentralize its operations from New Orleans in the wake of Hurricane Katrina's devastation. More than half the transferred employees had already moved to Jackson offices by August, and that will move to the area in 2010.

Entergy spokespeople explained that the company is working to shift some positions to different sections of Entergy's multi-state service area, which also includes Louisiana, Arkansas and Texas.

The company moved quickly to relocate some of its facilities out of New Orleans after Katrina struck in 2005. In April 2006 Entergy decided to temporarily relocate its post-storm headquarters in the former MCI WorldCom offices in Clinton. While here, the state lobbied hard to coax the company to move permanently, but Entergy returned to New Orleans months after the water receded. Soon after, Entergy announced it would enact a decentralizing program for many of its operators.

In October 2007, Entergy announced a $25 million plan to build a transmission operations center in Jackson that would bring in 200 employees to the area. In the process of the move, the company is draining jobs from its New Orleans headquarters at 639 Loyola Ave. Many of the important financial processing aspects of the company are now sitting in Texas, while Jackson enjoys the presence of transmission engineers and computer operators. Little Rock gets the benefit of a $41 million data processing center.

An Entergy press release said the campus-style center would include the company's transmission headquarters, but has the ability to accommodate the upcoming expansion of Entergy's nuclear headquarters. The complex, slated for completion in November, will also hold a storm response command and training center from which the company will stage it's response to major events in Mississippi, Louisiana, Arkansas and Texas. Once finished, the complex will accommodate more than 500 employees.

"The new complex will be designed to help us better meet our commitments to customers," said Entergy Mississippi President and CEO Carolyn Shanks in a statement. "Those include providing reliable, affordable power and preparing for future needs."

The campus environment on Interstate 220 is not the most convenient place to try to get lunch if you don't have a car. Food-industry businessesor even residential housing, for that matterare scarce in that area, and won't do much to add cash flow to downtown Jackson. The nearest hot food is only a selection of Chester Fried Chicken-brand food items provided by a local gas station on the other side of 220. Still, Allen said the area's new residents will likely adapt quickly to their new surroundings, despite their intermediate isolation.

"Anytime you have a change, it can be disconcerting to people. They'll have to get back to a new lifestyle but I think they'll enjoy it. Jackson has tons of arts, libraries and museums and activities. Pound for pound, we have just as much to offer as New Orleans," Allen said.

He added that new residents trickling in from New Orleans are likely to find a more relaxed atmosphere as well.

"They'll have a slower lifestyle, a more personable lifestyle. Mississippi's not a state, they'll find: It's a club. They'll get to knowing a lot of folks, and they'll get acclimated and begin to enjoy themselves," Allen said. "You don't hear about a lot of Mississippians moving north to retire, but you do her a lot about northern folks coming to Mississippi to retire."

With the new Entergy and FBI buildings in that area, I hope it will be the start of something new in that area. BankPlus also recently built a new branch at the corner of Watkins and I-220. I also want to welcome those from New Orleans to the Jackson and hope they enjoy their stay here.