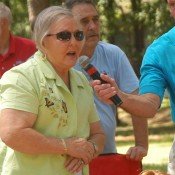 Myth: Your health care will be rationed, like Canada.
Truth: The bill says nothing whatsoever about the government getting stingy on health care. It does place a cap on out-of-pocket expenses a beneficiary can pay for a basic benefits package. An individual using the new plan can only pay $5,000, for example. (Insurance companies, by comparison, regularly demand $5,000 deductibles.) The bill makes mention of an advisory committee to recommend what benefits are available, but the bill makes clear that this is only a recommendation, not an order.

Myth: Non-citizens will benefit from the plan that you're paying for through your taxes.
Truth: Lies, lies, lies. The public option is a government plan, practically an extension of Social Security. Non-citizens aren't eligible for Social Security, eithereven though their employers pay into it with a portion of their paychecks. The only way a non-citizen can get health care in this country is by breaking the law and stealing an identity or by visiting an emergency room, which isn't allowed to let even non-citizens bleed to death on their floor.

Myth: The government will create death panels to dictate your end-of-life treatment, possibly even authorizing euthanasia to cut costs for the most ailing and expensive beneficiaries.
Truth: Legislators actually removed a section of the bill pertaining to "end of life care," which involved counseling services aimed at somebody who probably doesn't see the beauty of dealing with an agonizing ailment for the remainder of their days. The end-of-life care smelled too much of Sarah Palin's "death panel," however, so they took it out.

Myth: The new tax will run small businesses out of business.
Truth: The bill requires employers with more than $400,000 on their payroll to either offer private health insurance coverage to their employees or pay an 8 percent tax on their payroll to help finance a public plan. The tax won't apply to anybody with payrolls less than $250,000.

Myth: The new tax will put people who can't afford insurance in the poor house.
Truth: The bill mandates every citizen must have insurance that meets a minimum federal standard. Those who don't have it must pay 2.5 percent of their modified gross income for the yearnot to exceed a national average premium. Do you want $10,000 worth of chemotherapy and expect to make no investment? The British pay handsomely for their "free" health care. Ours, say reform advocates, will be a deal by comparison.

Myth: A government committee will dictate your treatments and the benefits you get.
Truth: The legislation sets up a "private-public advisory committee," which is indeed government in origin. It's headed by the U.S. surgeon general, though it is comprised of governmental independent "medical experts" picked by the president and the comptroller general. The advisory committee only has the power "to recommend" what benefits are included in the provided insurance plans. Its recommendations don't have to be adopted, and it has no power to pick what treatments anybody gets. You'll still have to turn to your insurance company for refusals on what treatments they'll cover.

Myth: Every U.S. citizen will have to have a national identification health card.
Truth: The legislation makes no mention of a nationally required identification health card. The closest thing the legislation comes to this is requiring new government standards for electronic medical transactions, which according to the bill "may" require the "utilization of a machine-readable health plan beneficiary identification card," to prove your eligibility for government services. Ever heard of a Medicaid or Medicare card?

"Lies, lies, lies. The public option is a government plan, practically an extension of Social Security. Non-citizens aren't eligible for Social Security, either" However the HR 3200 contains no enforcement. Medicaid has in place SAVE or Systematic Alien Verification for Entitlements. When HR 3200 was being written, Republicans tried to offer an amendment which would have required SAVE to be used with ObamaCare (http://tinyurl.com/mp8g6z - PDF download) It was defeated by a party line vote. So HR 3200 only contained a declarative statement that illegals would not be covered, but it did not contain the same enforcement of Medicaid. After Obama's speech, Senators scurried to fill in loopholes in their bills, which would have allowed coverage and on 11 Sept. the White House acknowledged that the language in 3200 was inadequate and issued changes including: "Verification will be required when purchasing health insurance on the exchange. One option is the SAVE program (Systematic Alien Verification for Entitlements) which states currently use to make sure that undocumented immigrants don’t participate in safety-net programs for which they are ineligible." http://tinyurl.com/ksxplp

Rob: Apparently there are good enough reasons for this stuff to be voted down to make it look like the amendment was offered as a red herring. (1.) All federal government benefits *already* have an immigration-verification component built in thanks to Welfare reform back in 1996. By making the "declarative statement," the effect is that these federal requirements would kick in. http://www.ncsl.org/default.aspx?tabid=13118 (2.) The Heller amendment was poorly worded in the case you did -- for some reason -- want a redundant iteration of the system for verifying federal eligibility, because it could (arguably) have given insurance companies access to a great deal of private information about the people it verifies, including citizens and legal immigrants: The benefit determination and approval under this subsection shall be the responsibility of the Exchange-participating health benefits plan offering the public health insurance option. (3.) Similar additional verification systems have proven inefficient, to say the least. And besides, we've tried that: A House oversight committee reviewed six state Medicaid programs in 2007 and found that verification rules had cost the federal government an additional $8.3 million. They caught exactly eight illegal immigrants. (4.) The argument against immigrants participating in healthcare reform conflates a few different issues: (a.) The Public Option would be an insurance program for which you pay a premium. It's not Medicare or even Medicaid. All things being equal, why would it be a problem for undocumented workers to pay into the program if it keeps them from heading to the emergency room for extremely expensive care? There's a cost-benefit trade-off here; undocumented workers are here and they will likely always be here, as it would be irresponsible to spend the money necessary to catch all of them. It's a bizarre logic that says "it's so important that undocumented immigrants are expelled from this country that I'm willing for the government to subsidize their healthcare in the ER in order to keep them from paying their own way into an insurance program." (b.) The subsidies for the program would be a Federal benefit and, therefore, subject to the immigration policies put in place by the 1996 Welfare Reform act. 5.) The amendment was offered as a cynical gambit by the same man who offered HR 3489, a 'Health Care Plan" that is straight up "tort reform" including a new one...am arbitrary three year statue of limitations on medical malpractice regardless of whether or not the injury manifests itself within three years. Here's his entire healthcare entry from his website: Dean opposes a government-run health care scheme that places personal health care choices in the hands of bureaucrats instead of in the hands of individuals and their doctors. A government system would lead to fewer choices for individuals, the rationing of medical care and higher taxes. Dean believes the primary objective for health care reform should be to provide affordable health insurance for all Americans that provide more choices, better access and higher quality care. Congress should work to curb frivolous lawsuits and runaway jury rewards that only serve to fatten the pockets of trial lawyers. Thanks for the post, though...the research was very enlightening!

So the WH suggestion of applying SAVE to the resolution was for what, exactly?

So the WH suggestion of applying SAVE to the resolution was for what, exactly? Misguided capitulation?

You owe me a clean monitor and keyboard as I've spit my iced tea all over them. I was too busy laughing to do it myself.