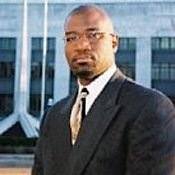 The state of Mississippi swore in its first African American judge under Republican Gov. Haley Barbour this morning.

"We're pleasantly surprised that the governor, after over 20 opportunities, has finally seen the wisdom and appointed an African American to a state court bench," Mississippi NAACP President Derrick Johnson told the Jackson Free Press.

Harrison, formerly the prosecuting attorney for Hinds County, was filled with emotion as he took the oath, according to onlookers.

"I agree ... that we have a new judge now who has a heart," said Jackson attorney Carlton Reeves, who was among the crowd witnessing the ceremony.

Harrison, who is 40, is also one of Barbour's youngest appointees. Harrison had previously told the Jackson Free Press during his campaign for Hinds County attorney that one of his biggest motivations for holding the political office was to steer wayward youth back in a proper direction.

"It's not too late to correct a downward spiral if the system catches them young and helps them acknowledges their behavior," Harrison said.

Magnolia Bar President Gale Walker said her organization kept the heat on the governor to appoint a black judge in Hinds County, pointing out that since serving as governor, Barbour has appointed 24 judges prior to Harrison without naming a single black judge.

Ed Brunini, who heads the governor's Judicial Appointments Advisory Committee -- which reviews the qualifications of potential judicial appointees -- said earlier this year that good black lawyers rarely chose to take a pay cut in order to hold a judgeship, and that his committee consequentially saw few worthy black applicants.

Harrison, who also worked as a part-time private attorney while holding his county office, took a pay cut for his new appointment.

Walker said she doubted Brunini's assessment was accurate, and set the Magnolia Bar to personally screening black applicants in an effort to make sure Brunini's committee had access to worthy applicants. She said at least five black members with praiseworthy resumes had applied for former circuit court Judge Bobby DeLaughter's vacated spot, and warned that the group would be closely watching the vetting process.

"We've answered your challenge that none are qualified or none are applying--yes, we are, and yes we have," Walker said in August.

DeLaughter, who will face sentencing in November, vacated his position after pleading guilty to obstruction of justice in the bribery scheme that involving former attorney Richard "Dickie" Scruggs. Harrison will occupy the remainder of DeLaughter's term.