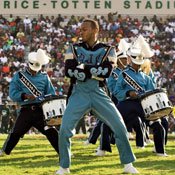 Prospective JSU band students expect to suffer some form of hazing when they join the Sonic Boom.

A Former Forest Hill High School band director and a local Jackson attorney say that high-school students know what they're getting into when they try out for the Jackson State University marching band, the Sonic Boom of the Southand that can mean beatings with mallets, 2-by-4 boards, baseball bats and bottles.

The Student Life Disciplinary Committee hearing last week convened an investigation of reports that band leaders ordered underclassmen to endure violent hazing that occurred at an undisclosed location along High Street. The incident involved some JSU graduates, according to the Student Life Disciplinary Committee, which also reported students suffering bruising and swelling. One student claimed a broken clavicle, according to an attorney representing a participant. In response, the committee suspended 27 students until fall 2011 for their role in the violence.

However, five students successfully appealed the decision. The decision blocks the suspended students from transferring to a different school because the university withholds their transcripts for the duration of the suspension. The university also put an additional 20 freshmen on probation.

"My kids knew that part of being in the band meant being in the close-knit group. They know what goes on at JSU before they go. They know all about the hazing. They tell me about it," said Taylor, who now works as Hillcrest Academy in South Jackson.

"The society is a little closer at HBCUs (historically black colleges and universities). I think the hazing is also a little bit harsher. I'm not a psychologist, but you could say that they've had to deal with adversity so long that they band together a little closer and demand higher expectations and commitment, but that still doesn't excuse the beatings by 2x4s."

Jackson attorney Jacob Ray, who is representing one of the JSU students said his client did walk into the JSU environment expecting some abuse, but endured it for the esteem and the band scholarship.

"I think students at Murrah or Provine, even some high school band members far up north and south of here, hear about what being in a fraternity like this is all about, but the consequences are so high," Ray said. "I think these kids, especially the ones in Mississippi, have family members who have been members of the band, and it's prestigious to them. It is a society like any other group society, and they wear it as a badge of honor."

Ray added, however, that the situation becomes problematic if band leaders tie the hazing ceremony to scholarships.

"There's a difference between pledging a fraternity and the survival of your scholarship based upon your participation in the band. This kid wouldn't be in Jackson at a four-year college had it not been for his ability to play the drums. He's determined to get a degree, so in my opinion, these kids agreed to hazing under duress."

Ray said the band had a high turnover, which may give the perception of "a culling process," that makes threats to a student's scholarship all the more convincing. "The idea that this kid thinks he may not be able to march because he didn't do what the section leader saysif you told me this when I was 18, I'd probably buy it," he said.

JSU leaders were quick to disavow the Sept. 18 hazing incident. "While we are very disappointed this event of hazing took place, we hope the suspension sends a message to all current and future members of the Sonic Boom, as well as fraternities and sororities, that hazing is simply unacceptable," JSU Associate Vice President of Academic Affairs Marcus Chanay said in a statement.

The school labored under allegations of a similar hazing ceremony in 2007, Band members are now forced to participate in sessions about hazing and sign pledges not to engage in such activity, according to JSU Director of University Communications Anthony Dean.

"Students who complained will go through a hearing for minor infractions," Dean said. "[T]hey all signed letters saying they would not go off campus and participate in these kinds of activities."

Taylor said hazing is a common practice at most colleges, though the ceremonies are usually less painful.

"You can put (underclassmen) on a scavenger hunt, and it's considered hazing," he said. "If you make them eat something they normally wouldn't eat, that's hazing. Some of it serves as a unifying measure in that you all went though the same battle. You did the same thing as all the alumni, and that builds up the camaraderie. In some ways that's a positive thing, but when kids do it without responsible supervisors around to say 'enough.' That's a problem."

The Entire Faculty of the Music Dept.at JSU should be held responsible for the action of students that are under their authority,especially these so called "Section-Leaders".The Faculty is ultimately responsible,be it a HBCU or not.