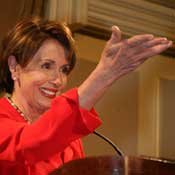 Rep. Nancy Pelosi, D-Calif., had a lot to be proud of at the end of October when the House released a new and improved bill to reform health care and health-care coverage. The 10-year $894 billion package, she said, would expand coverage to more than 36 million Americans.

The House passed H.R. 3692 only a few days later by a narrow five-vote surplus, presenting to the Senate a package that shares many similarities with an earlier House health-care reform bill, H.R. 3200.

On Nov. 21 the Senate mustered a 60-vote tally to hold off the ubiquitous Republican threat of a filibuster on the Senate bill. The Senate now moves forward with a floor debate on the Patient Protection and Affordable Care Act.

U.S. Rep. Bennie Thompson sent out a press release from his office praising the House version of reform.

"This health care legislation will provide security for seniors, guarantee health insurance coverage for the uninsured, make health care more affordable for middle-class families and contrary to popular belief, reduce the federal deficit over the next ten years and beyond while covering 96 percent of Americans," Thompson wrote after his November vote passing the House bill.

The Senate version, on the other hand, charges a flat fee to employers with more than 50 employees that do not offer insurance coverage. The fee is equal to the dollar amount of each employee's federal tax credit, or $400 multiplied by the number of employees working at the businesswhichever is cheaper.

The bills have stark contrasts, however. While both bills impose an individual mandate to buy insurance or risk a new annual fee, H.R. 3962 charges a 2.5 percent penalty on individual's adjusted gross income, while Senate bill H.R. 3590 charges a $750 per adult, per year, penalty. The House bill grants exceptions for those with incomes below the filing threshold of $9,350 for singles and $18,700 for couples in 2009. The Senate plan exempts those with incomes below 133 percent of the poverty level or if the lowest cost plan available to that person exceeds 8 percent of their income.

Both bills come with a price tag of about $1 trillion over the course of 10 years when considering the gross cost of expanding Medicaid, though both bills fund themselves in different ways. House Resolution 3962 taxes individuals who choose to do without acceptable health-care coverage, but also gets money from a new tax of 2.5 percent of the price on the first taxable sale of any medical device. The Senate bill generates revenue from the $750 annual fee for not having insurance, but also imposes a new tax on high-end insurance.

Both the Senate and House bills prohibit pre-existing condition exclusions in the insured group market and in the exchange, although the new House bill goes a step further by establishing federal marketing standards on grievance and appeals mechanisms, and it prohibits insurance companies from pulling coverage except in the case of fraud.

Both bills also create a temporary high-risk pool to provide quick coverage to people with pre-existing medical conditions and people who have been denied coverage or who have only been offered unaffordable coverage and who have been uninsured for six or more months.

Sure to anger insurance companies, however, the House bill requires the government to review every increase in health-insurance premiums that companies propose prior to their implementation; shortens the amount of time insurance companies can scan a customer's medical history for pre-existing conditions (from six months to 30 days); and removes the antitrust exemption for health insurers and medical malpractice insurers, which allows insurance companies to share customers' information with each other.

Oleta Fitzgerald, director of the Mississippi Children's Defense Fund, pointed out that people at middle- or low-income levels have paid more of their income to taxes over the last 20 years. She said the House bill marked a small reversal of that situation.

"I think that over the course ... of the last several decades the wealthy have done very well, and have not had to give up very much compared to the middle class," Fitzgerald said.

Rep. Gene Taylor, D-Miss., who is not a fan of the new health-care bill, is no doubt pleased with its antitrust aspect. Taylor had joined Democrat Reps. Peter DeFazio, Peter Welch and Bart Stupak in October to urge Pelosi to include language in the health-reform bill that would require the health-insurance industry to operate under the same antitrust laws as all other industries.

"Insurance companies should not be above the law," Taylor stated on his Web site, while adding that the insurance industry has operated beyond the reach of America's antitrust laws since Congress passed the McCarran-Ferguson Act in 1945. The exemption, he said, was "intended to be temporary."

Both bills share enemies among women and immigrants. House Resolution 3962, like the Senate version, pleases the anti-abortion lobby by altering rules regarding the creation of insurance pooling mechanisms. The House bill, like the Senate version, requires private insurers that choose to offer a plan in the exchange that covers abortion services, which extend beyond those permitted by federal law (that is, to save the life of the woman and in cases of rape and incest), to also offer an identical plan that does not cover abortions. The House bill also prohibits federal funding for abortion procedures outside the scope of rape, incest or life-endangerment.

Proponents say the bills discriminate against lower-income Americans, who will be less likely to afford abortions without government funding.

Felicia Brown-Williams, of Planned Parenthood, said the amendment amounts to a constitutional violation.

"This would have the effect of denying women the right to use their own personal private funds to purchase an insurance plan with abortion coverage in the new health system," Brown-Williams said.

Undocumented immigrants, while subject to the individual mandates of both bills, will not be able to participate in either of the two insurance exchanges. Both bills reaffirm existing restrictions in Medicaid and CHIP on undocumented immigrants, including children. And, even though many undocumented workers pay federal and state taxes, both bills prohibit immigrants from applying for affordability credits or subsidies that make health insurance more affordable.

Neither of the bills removes the five-year waiting period barring immigrantsmany of them documented by the U.S. governmentfrom enrolling in Medicaid and Medicare.