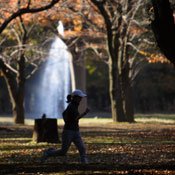 Running isn't just a corporal experience. I lace up my New Balance trainers and hit the trails in the afternoon not just to keep my physical body sound, but also my mind. Some people knit or get creative in the kitchen or garden. Others find solace and escape in reading, playing Sudoku, or practicing yoga and meditation. None of these pursuits is better at calming one's spirit than another.

Ask yourself: What's the most effective way to nourish my soul and help me escape my hectic day-to-day existence? For me, nothing can compare to the cathartic release provided by running.

I'm not referring, mind you, to just any old running. I'm not hitting the pavement or blocking out the world by blasting fast-paced music through my iPod earbuds. I'm not trying to improve speed, or working toward a half-marathon. I confess: I'm not really training for anything. Not, at least, in the conventional runner's sense.

So what am I doing? I'm using running as a conduit. To what? Nature. And to my soul.

John Muir, legendary nature conservationist and founder of the Sierra Club, once said: "Most people are on the world, not in ithave no conscious sympathy or relationship to anything about themundiffused, separate, and rigidly alone like marbles of polished stone, touching but separate."

In the modern world, we spend a good deal of time maintaining our separateness from nature. We seldom prepare meals at home, let alone grow and harvest our own food. Few of us make a livingor carve out an existencebased on working the land.

Instead, most of us climb into our cars and drive to work every morning without the company of others. We then sit at a desk for eight or more hours and stare at a computer. Sometimes, our only connection to the outside world is the mountain-range screensaver that pops up when we're idle, or razor-thin glimpses of green through mass-transit windows. We have, in short, lost much of our intimacy with the natural world.

Throughout history, nature has served as the ultimate teacher to some of our greatest thinkers: artists, writers, philosophers and prophets have spoken of the infinite wisdom found in its wild depths and the lessons they've learned.

I go trail running, then, to reconnect and transcend. Most times, I find myself going deeper into the heart of the hills and woods, where every creature is pulsating with life and singing its story. Every step offers up a new chance to hear and feel the world I inhabit, every breath I take into my lungs, another indulgence of the senses. And though the rush of adrenaline is a draw for many short-distance runners, the endorphin-stimulated peace that accompanies long-distance running can prove far more satisfying.

Best yet, I don't need a playlist for this: Crisp leaves underfoot, the hum of insects and chatter of squirrels, and the beat of my own heart pumping make a far superior soundtrack than anything I can find on iTunes.

This flurry of activity is a comforting reminder that we're all part of something greater, where even the seeming fragments of nature are, as Muir says, "hitched to everything else in the universe." In the great outdoors, nothing exists in isolation. When you take up the role of explorer, you become a part of nature's web-like systems, too.

I've managed to run through autumn and winter in regions of the country where snow and ice are regular fixtures. But in Jackson you have the advantage of being able to exercise outdoors more often than most. Now is the perfect time to get out and run, as the blazing heat of summer (and early fall) has all but subsided and made way for the pleasant winters we're accustomed to in the south. There are plenty of wild spots around the Jackson metro to explore and even a few right in the heart of the city.

When you find yourself yearning to re-establish that fundamental connection between your soul and the great, wide, world we inhabit, pull on your most comfy jogging sneakers and hit the trailsrunning.

Happy Trails To You
LeFleur's Bluff, Rocky Springs, Tupelo, Ridgelandare among the trails to discover in and around the Natchez Trace and throughout Mississippi's national parks. Here are a few sites to help you find trails:

Great Outdoors Gear
Not all (running) shoes are created equal. Ill-fitting footwear can result in injury, and athletic shoes that aren't specifically made for the sport you're participating in can be detrimental. If you're only going to occasionally take your run off-road, you might actually be better off keeping your road shoes. But if you're planning to trail run on a regular basis, you'll find that trail shoes are well worth the investment.