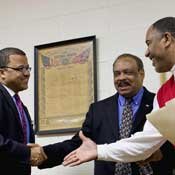 Jackson mayoral candidates agreed during a Saturday forum that the current administration was failing to make Jackson all it could be. The forum, hosted by The Young Democrats of Mississippi, featured seven Democratic Jackson mayoral candidates: David Archie, Dorothy Benford, Marshand Crisler, Eddie Fair, John Horhn, Harvey Johnson and Robert Johnson. Current Democratic Mayor Frank Melton and candidate Joyce Harper did not attend. Taaka Scott Bailey, the daughter of candidate Brenda Scott, stood in for her mother, who was also not available.

When asked how to improve upon the city's crime figures, all candidates declared their top priority to be the re-establishment of the Crime Prevention Unit, a city division that served as an intermediary between the police department and neighborhood associations or residents. All vowed to empower neighborhood associations and ensure the police department works more intimately with them.

Archie, in particular, urged neighborhood associations to recruit "young thugs," while Crisler, Jackson's Ward 6 city councilman, said he could accomplish more in a position of authority. Hinds County Tax Collector Eddie Fair said he wanted to increase the number of police officers and make "absolutely sure we pay them."

Horhn, a 17-year state senator, took credit for funding developments like the TelCom Center, the JSU Parkway and the Farish Street Historical District, and said his federal connections and ties with the Mississippi Senate would ensure future road and infrastructure repair.

Former Mayor Johnson also took credit for much of the development currently underway in Jackson. "You have to look at my proven track record. You have to look at the seeds that have been planted during my eight years as mayor," he said.

Robert Johnson, a former Jackson police chief whom Harvey Johnson released from service under his administration, pointed out that the city would never be a first-class city as long as it suffered from bad leadership.

Benford said the city contained "two communities: one affluent and one of extreme poverty," and said she would work to erase the gap between the two.

Archie, meanwhile, adopted the stance of an anti-politician, pointing out that he has never held a political position and thus has not sold out to a widespread political mentality of corruption and entropy. "You don't need the same old politics and the same old people," he told the audience.

The candidates had varied views on attracting new business to Jackson.

Robert Johnson said the city needed a "broad strategic plan" that de-emphasized the downtown area and showed that "businesses are important no matter where they're located."

Harvey Johnson, using Westland Plaza as an example, pointed out that he had a track record for building grant programs to improve all parts of the city. He also pointed out that a leader had to emphasize the kinds of businesses he or she attracts in order to provide a living wage for employees and improve the city's tax base.

Like Robert Johnson, Crisler said he wanted to aim development outside of the downtown area: "We've started on the downtown corridor. Now it's time to look at the periphery of the community."

Horhn also declared ownership of the reclamation of Westland Plaza, saying he had coaxed the owners of the McDade grocery chain to buy the Winn-Dixie anchor building after that chain filed bankruptcy.

Archie suggested selling off city-claimed property and arranging grants to rebuild it. "We have plenty of raggedy property. Sell it for a dollar and get it up and running," he said.

Scott Bailey, speaking on behalf of Brenda Scott, emphasized training people on how to secure business loans and run a business, and proposed to "put an end to palm greasing," claiming that business as usual was inefficient.

When asked how to finance road repairs and infrastructure, Harvey Johnson said city bonds were nearly pointless because most bond payments outlasted the life span of the repairs they financed, and said the city needed to be able to call upon the state for support.

Horhn countered that the state could not be relied upon to support the city because "legislators do not have confidence in the city leadership," and vowed to restore that confidence.

Fair said he would hire two more lobbyists to argue for the city during the legislative session. "One to work with the good ole boys and one with the congressional black caucus," he said.

Crisler attributed much of the city's revenue shortage to the city's untaxed property owned by non-profits, churches or government. He said the city's 185,000 residents should be united in pressing legislators to make the city a priority.

Fair suggested taxing the commuters driving into the city, although he was not specific about the means of the tax, be it a payroll tax or a toll road. A toll road would require legislative approval.

Benford suggested establishing a city tax-assessment department and a city tax-collection departmentsuggestions that may also require state cooperation. Bailey said her mother was also open to a commuter tax.

Robert Johnson, meanwhile, said a good leader could work around revenue shortfalls and said as a former police chief, he was more than accustomed to getting things done with an insufficient budget.

Glad to see that Chief Robert Johnson has thrown his hat in the ring. I used to always think of "Robert Johnson" as the bluesman who is in the Rock and Roll Hall of Fame. But the Chief has done the name proud in his own right for his tough but fair law enforcement policies in Jackson and his Corrections Department work statewide. That last sentence in the article says it all. Chief Johnson is not making excuses and is not going to let budget shortfalls get in his way. When he is Mayor, he will get things done and act in a way that will make everyone in the city PROUD again.