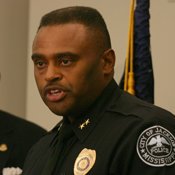 The city of Jackson's police force is slated for some technological upgrades, thanks to a Jackson City Council vote and the Obama administration's initiative to expand the national Community Oriented Policing Services program.

The council voted Monday to approve a federal COPS grant request that could award $750,000 to the city of Jackson for hardware sand software upgrades, including 50 precision computer mounts and modems, which will be used to install mobile computers in city patrol cars. The computers are a more rugged version of an office laptop fit for the rigors of police dutyand well capable of alerting the officer of your unpaid municipal traffic citations.

The funding will also finance a tactical armored vehicle for the city's SWAT team and a ballistics-firing tank for testing ammunition rounds.

Jackson Communications Director Chris Mims said he was particularly pleased with the new additions to the city crime lab that the grant money will make possible.

"Perhaps some of the most important technology we're getting is a mass spectrometer and software upgrade for the crime lab," Mims said.

City police officers have complained in the past that the city crime lab is woefully underused due to absent or malfunctioning technology, and that the city too often must refer to outside agencies for crime analysis.

The police force could also be looking at new handheld speech translators and facial ID software, which will finally allow the police department to fashion computerized composite drawings of suspectstechnology that has been available to other capital cities for years.

The city began pushing for the grants in February, Mims said, after it polled city departments on technological needs that the grant could address. The city submitted the results to the U.S. Department of Justice, which notified the city in May what it could get.

"We began in earnest to get this in May, right after the DOJ responded to us," Mims said.

The city made good use of COPS money for technological upgrades and to finance the salaries of new academy recruits during Mayor Harvey Johnson's first two terms. Former Police Chief Robert Moore told the Jackson Free Press in 2007 that he made liberal use of the grant money for academy classes during his time as chief. The federal COPS program faltered under the administration of former President George W. Bush, according to city leaders like Leslie McLemore, who served on the City Council during the Bush years.

President Barack Obama has made known his desire to reinvigorate the program, however, as a facet of his American Recovery and Reinvestment Act. U.S. Attorney General Eric Holder also made a personal commitment earlier this year to hire or keep 5,000 career law enforcement jobs through the COPS Hiring Recovery Program.