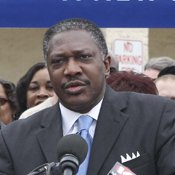 "The question has often been asked of me by some of my saner friends, 'Why on earth would you want to be mayor of Jackson?' To that point, my reply is always: Because I love this city and don't want to see it fail," he said.

Horhn, who has been a senator since 1993, said he would like to use his legislative contacts to generate more state revenue for the city to offset the high percentage of non-taxable property the city contains.

"For the capital city, which has 40 percent of its property not on the tax roll, it makes sense for the state to rebate an additional amount of sales tax back to the city to recover, as the city hosts the State Capitol," Horhn said. "An additional one-and-a-half percent in sales tax for the city would generate just under $3 million."

"One of the things that my friends in the Legislature say to me is that they're waiting for better leadership in the city before trying to help the city," said Horhn, who noted that traditionally legislators have low regard for the city, and little desire to allot it any additional money. "I think the better relationship that I bring the city could help us get some of that done.

I said on another thread that no one candidate besides Melton has a fair chance of getting my vote. The more I read about John Horhn and his platform, the more I put him in front-runner status for my vote. With his ties to the state legislature, I can see Horhn getting things done as far as dealing with the legislature is concerned.

This makes so much sense to me, at least as a proposal. While its still early in the process, I am beginning to think Sen. Horhn may eclipse both Crisler and 'Junior' as top contender for Mayor.

I agree with this idea of a rebate. All counties in Mississippi are served by the city of Jackson due to it's legal functions. Jackson deserves better than it gets from the rest of the state.