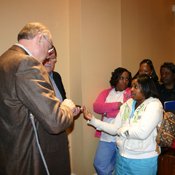 Developer Clarence Chapman, of Chartre Consulting Ltd., assure prospective homeowners that they may begin moving into a Chartre development.

Jackson Mayor Frank Melton stepped away from his federal trial Friday to announce that city inspectors no longer have concerns about infrastructure problems at the Timber Falls and Forest Hills Place neighborhood developments. City inspectors halted the timetable for almost 20 families looking to move in last weekend, citing concerns with the new neighborhood's roads and electric hook-ups.

Almost 200 prospective occupants of the new neighborhood have already paid deposits to the Mississippi Home Corporation, which is financing and overseeing the 400-acre project on Raymond Road. Developer Clarence Chapman, of Chartre Consulting Ltd. in Oxford, said the community has now been "tested and passed." Chapman added that occupants would be moving in Friday.

The company only began construction of the 170 homes in Forest Hills Place last May, and the Timber Falls' 155 homes last August. Some of the homes were complete four months ago, though Chapman admitted to the presence of "a little anguish" because of the fevered construction pace. He pointed out that the company is still ahead of its original Dec. 31 deadline.

Amazingly, Chapman told the Jackson Free Press that the plummeting economy had no negative impact on the $240 million development, primarily because "the financing was all taken care of and locked up before we started." Chapman said the economy was actually putting the development more in demand because it aims at lower income residents, some paying $600 a month.

"The type of development we do is the only thing going on in the real-estate market," Chapman said. "We're in our briar patch now."

The nature of the development raised some eyebrows from council members and South Jackson residents when developers first proposed it in 2006. Opponents claimed the development, which allows a 15-year lease, essentially creates a whole neighborhood of rental property. Even Chapman agreed to the comparison, to a point.

"Technically, it is rental property, but practically it is lease-purchased property. If they pay our reduced rent for 15 years, it will be their home," Chapman said, adding that though developers will maintain the property for the 15-year period, occupants suffer no financial penalties for moving away prior to the end of 15-year lease, unless they damage the home.

The City Council initially stood against the development, which they claimed circumvented the city's moratorium on the construction of rental property. In 2006, it even voted 7-0 on an April 4 resolution urging Mississippi Home Corporation, which allocated the tax-credit money to Chartre, to focus more credit on rehabilitating existing property instead of building new property.

"You could say that we lost this round this year, but we'll be working to stop 450 of these extended lease homes from becoming 2,200 homes," then-Council President Marshand Crisler told the Jackson Free Press. Crisler represents Ward 6, which contains the development.

Crisler later warmed to the development, but expressed anger over developers' perceived failure to comply with city codes during the Feb. 20 council meeting.

"We have a huge mess, and it's time to lawyer up," Crisler told The Clarion-Ledger that day. "I think the city has done its part. The only thing is they (developers) haven't complied."

Though the city and the developer appeared to have ironed out its differences Friday, Council President Leslie McLemore expressed dismay at the city's need to rely on private inspectors rather than its understaffed code-services department.

"How can we, because of the lack of staff, monitor or check the inspections to know that all of them are up to code? We are at a disadvantage before we're even out of the starting gate," McLemore said.

City Housing Division Chief Louis Armstrong, who had initially reported several issues with the development last Tuesday, assured McLemore that the city randomly inspects the homes to make sure the engineer has met city standards, and said the engineer "has met our requirements."

Chief Administrative Officer Robert Walker pointed out to McLemore that the council was meeting on the matter Friday "precisely because the city was doing its job."

"I'm not saying we don't need staff, but this particular situation arose out of the need to have some inspections completed by a certain time period, and there was an agreement that it would be best if we  hired and paid a firm to move us faster," Walker said.

Armstrong added that the city would have been stuck with completing 3,500 inspections on the South Jackson development if it had not opted to use a private company. He then said that he had approached the council on the prospect of increasing pay and staff positions about six months ago during budget hearings.

Mark my words, there will be PROBLEMS, water, sewer, homeowners complaints about utility costs, with this development down the road. If the home or the development could not pass inspections last week, then all of a sudden they get a passing grade this week - What did they do, sprinkle fairy dust on the problem? Note, if these homes were not built to certain standards, then homeowners who are already struggling, will not be able to pay the utility costs that accompany a home that was poorly constructed. Also, it seems to be something wrong with the inspection process. If inspectors were routinely inspecting all along, then you don't wait until the 11th hour to give the development a failing grade. Uggg....