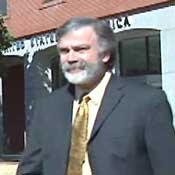 Count five of the indictments charges DeLaughter with knowingly misleading FBI investigators by claiming he "never spoke to Ed Peters" on issues relating to a Scruggs case before DeLaughter -- a statement contested by Peters, who is working with investigators.

The DeLaughter indictments reveal the latest thread to unravel in the corruption web around Scruggs and his associates. The revelations started after two of Scruggs' former law partners, Alwyn Luckey and Roberts Wilson, sued Scruggs in 1994, claiming he had stiffed them of their portion of legal fees from successful asbestos and tobacco lawsuits.

U.S. Magistrate Judge Jerry Davis ordered Scruggs to pay Luckey $17 million in 2005, but Scruggs got better treatment with the Wilson suit after Scruggs' legal team brought on Peters, who -- according to prosecutors -- "corruptly influenced" DeLaughter, who was presiding over the case.

Scruggs hired former Booneville attorney Joey Langston and Timothy Balducci to assist in retaining Peters, who was DeLaughter's boss back when DeLaughter was an assistant district attorney with Hinds County.

Langston and Balducci recently pled guilty to paying Peters $1 million to influence DeLaughter and to dangle the possibility of a federal court appointment before the judge. Scruggs' brother-in-law, Sen. Trent Lott, was in a position to recommend DeLaughter for a federal appointment, though Lott has not been charged to date. Lott, the former Republican majority leader of the U.S. Senate, resigned from public office the day before Scruggs was indicted in late 2007.

Lott called DeLaughter about the post, but never recommended him.

Balducci testified last year that Peters was speaking with DeLaughter and that the two shared an intimate enough relationship with the case for Peters to show Scruggs one of DeLaughter's judicial orders before the judge had even filed it.

Emily Maw, director of the New Orleans-based Innocence Project, which overturns bad convictions through DNA evidence, said DeLaughter had willingly worked to convict an innocent man to life in prison.

"If Bobby DeLaughter is guilty of that with which he is currently charged, it won't be the first time that I know he and Ed Peters have corrupted the justice system. They knowingly sent an innocent man to the penitentiary for the rest of his life once before and there is no way of knowing if Cedric was the only one, though I doubt it," Maw said.

"The only difference between the miscarriage of justice in Cedric Willis' case and the current charges Bobby DeLaughter is facing is that Bobby DeLaughter has never been held to account for what he did to Cedric Willis, who was a poor, black teenager when his life was taken away from him."

That difference could be shrinking if prosecutors close a case on DeLaughter. Scruggs pled guilty to mail fraud last Tuesday in a second bribery scheme. The attorney owned up to a plot to entice a judge to rule in his favor in an asbestos case by promising he would be appointed to the federal bench with help from Scruggs' brother-in-law Lott.

Scruggs is already serving five years in jail, and got an additional two years added to his sentence and a $100,000 fine.

Attorneys watching the case say there is no state law against behind-the-scenes contact between judges and attorneys, and that the contact is unethical but not, in itself, illegal. They also point out that the prosecution has not indicated any direct payments to DeLaughter from Scruggs' team -- only to Ed Peters.

Mississippi College School of Law professor Matt Steffey said the prosecutor's current arguments frame DeLaughter as a small player in the Scruggs saga, and that the judge could be getting rolled by people far more enmeshed in corruption than he.

"We don't know everything prosecutors know. All we know is this: that Ed Peters took a million dollars and put it in his pocket and tried to bribe a judge, and we know that people were working to bribe a judge. But we also know that no money ever made its way to DeLaughter and that he did not get a political appointment (from Lott) for his behavior," Steffey said.

"I'm not saying DeLaughter should be ignored, but I, for instance, would want a little more than the uncorroborated testimony of Ed Peters before I'd put DeLaughter away," Steffey said. "For some reason, Ed Peters isn't charged with a crime, and Bobby DeLaughter is, but the one person that we're 100 percent sure has committed a crime, so far, is Ed Peters."

"The only difference between the miscarriage of justice in Cedric Willis' case and the current charges Bobby DeLaughter is facing is that Bobby DeLaughter has never been held to account for what he did to Cedric Willis, who was a poor, black teenager when his life was taken away from him." Bam! That's gotta hurt. As for Steffey's comments, he is certainly right that we don't yet know what the evidence is against DeLaughter. On the other hand, it's hard to imagine that Peters took $1 million and DeLaughter got nothing. Obviously, federal prosecutors think he got something. Is there confirmation that Peters is getting off easy because he will testify against DeLaughter? Wouldn't they usually charge Peters to hold him over a barrel, so to speak?

Peters neglected much during his 20 plus year career as DA and probably participated in other conspiracies when he was sworn to administer justice. He is getting off light because he knows way too much about Jackson's dirt(that would at the very least tarnish many reputations here). I hope he will bring down at least one additional big one. But he is the big one...