Levee Board Votes for Levees 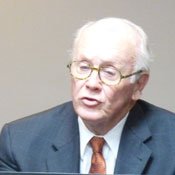 The controversial "Two Lakes" saga ended Monday when the Rankin-Hinds Pearl River Flood and Drainage Control District voted to move ahead with a levees-only flood-control plan endorsed by the U.S. Army Corps of Engineers. Flowood Mayor Gary Rhoads moved to accept the Corps' recommendation that the levees along the Pearl River between Hinds and Rankin counties be extended.

"I'm going to make a motion that the board adopt a National Economic Development plan, a NED plan, which is a levee plan ... contingent upon the Corps' agreement to allow for recreation or water fixtures within the levee system on Town Creek or any other creek in the area," Rhoads said. He added that the action depended on the Corps' agreement to allow levees to be designed to accommodate a modest lake impoundment along the river in the future if local taxpayers were willing to finance it.

The other mayors on the Levee Board, including Johnson, argued for the motion, citing concerns of their constituents about the urgency of flood control in the area, which could suffer more delays were a development plan to bring lawsuits.

Even Pearl Mayor Brad Rogers, who received more than $5,000 from a campaign source hostile to the levee plan supporters voted in favor of the Monday motion, although he made few comments on the issue.

Developers Leland Speed and Socrates Garrett vehemently opposed the motion, which would effectively end debate on the possibility of a large "Two Lakes" development plan, endorsed by Jackson oilman John McGowan and others. The Two Lakes plan is a much bigger, separate project from the more modest lake plan made possible through Rhoads' motion.

The board approved the motion with a 5-to-2 vote, with only Speed and Garrett voting in opposition.

"This is a tragic day in the history of the city of Jackson," Speed said following the vote. "This plan condemns the city of Jackson to flooding. The Corps of Engineers designed another plan a few years ago, back in 1962, and aggravated the flooding in Jackson. This is a flawed design. It does not provide protection for backwater flooding.

"The idea that we're going to get additional help from the Corps to do anything, I think, is a dream."

Speed said the Corps' levee plan does not include the additional costs of multiple backwater pumps to avoid flooding along city creeks draining into the river.

A September Corps study proposes a $206 million earthen levee plan containing costs for relocations, floodway control, diversion structures and mitigation, but no mention of mechanical pumps installed at the mouth of Jackson creeks. The degree of protection resulting from the levee plan, according to Corps calculations, is only 79 percent.

Speed referred to an aerial photo of the tragic 1979 flood, pointing to darker water filling the inner portion of the downtown area.

"That's backwater coming into the city from the creeks and out of the drains. That's water that these levees the Corps wants to force feed us won't handle, because their plan does not include creek pumps to keep the flood water from backing into the creeks," he said."

The Corps explained at a September meeting with the levee board that the levee plan incorporates flood gates at the mouths of the creeks to keep high river water from coursing back up into the streams. The flood gates could prove useless if the river is rising with floodwater from upstream at the same time Jackson creeks are getting inundated with heavy, prolonged rain, however.

Corps officials assured members of the levee board that such an event would be rare. Heavy rain, they said, rarely accompanies rising spring floodwater from upriver. Even the massive flood of 1979 arrived on a sunny day, leaving residents stunned that floodwater was overtaking the levees.

Speed insisted that the Corps is playing on the division among some levee board members: "The Corps is strong-arming this board into accepting a plan that will not protect the city of Jackson, and they're able to do it because they're counting on people not to give a damn about Jackson," Speed said.

Rhoads motioned to adjourn the meeting as Speed argued the issue, a motion Speed opposed. "I've got another motion," Speed protested.

"You can't submit another motion," said Richland Mayor Mark Scarborough. "You have to vote on the motion to adjourn. You can not substitute a motion for another motion."

Johnson parted ways with the other mayors on that vote, joining Speed and Garrett in opposing the vote to adjourn the meeting. The three votes did not make up a majority, however, and the meeting ended with a very despondent John McGowanwho immediately confronted Rhoads in front of T.V. cameras.

"I've got four hospitals over here," Rhoads told McGowan. "You're worried about making money. There's a big difference. You're not going to use the taxpayers of Rankin or Hinds County to pay forthis thing."

"You've been at it over here studying flood control, taking taxpayers' money for 13 years since I've been fooling with the Two Lakes plan, and nothing's come out of it."

Rhoads remained resolute: "Look, you've got a pretty concept. Unfortunately, it does not work. It's not feasible, so the taxpayers of Rankin County and the city of Flowood are not going to pay for you to be an entrepreneur and make more millions."

Johnson said he was aware of flaws in the current levee plan envisioned by the Corps, but admitted that his most pressing need was to retain access to $133 million in federal co-payments to help finance flood control. Johnson feared that the Corps was losing patience with the local board and would pull the $133 million if the board did not surrender the lake plan.

"Speed pointed out that this will cause downtown flooding, but I hope that as we go through this process, this board will have the opportunity to look at how it's progressing and take appropriate action at that time," Johnson said. "At this time, though, we need to make sure we maintain the (federal money) and the ability to include recreational and water features. If that money is lost then we are truly back to square one."

"The Corps of Engineers designed another plan a few years ago, back in 1962, and aggravated the flooding in Jackson. " Any thoughts about what plan Speed is referring to? A search of my files for projects in 1962 turned up: - Jackson International Airport was built in 1962 in Rankin County approximately 5 miles from Jackson and replaced Hawkins Field as the primary commercial airport in the area. - The Rankin-Hinds Pearl River Flood and Drainage Control District was formed in 1962 by the Mississippi Legislature. - The Ross Barnett Reservoir was completed in 1962 by the Pearl River Water Supply District. The Ross Barnett Reservoir was designed essentially as a water supply and recreation facility. - The record high temperature at Jackson of 103 degrees F occurred 29 June 1969 , while a record low temperature of -3 degrees F occurred in January 1962. McGowan noted is the NSS that "The Jackson Levee System was built in 1962 to accommodate the maximum flood prior to that time." The Corps FS report states that "There are two existing levee segments within the study area - Jackson and East Jackson. These levees were completed in 1968 by the Mobile District of the Corps of Engineers." My guess is that Speed is referring to the levees completed in 1968 (and extended in 1984). I agree that these levees may have been built too close together, causing a bottleneck through the Jackson Metro. This is one of the (many) points that need to be addressed going forward with the Corps. However, I don't know of any unique solutions offered by the 2-lake proposal on this issue.

I do get the feeling that Mr. Speed is throwing a lot of stuff out that doesn't have clear factual context, shall we say. I'm sure he means well, but I don't see how it helps to just throw a bunch of stuff against the wall to see what sticks, not if he wants to help us find a good solution.

Three cheers for Gary Rhoads not taking any [email protected]! Did this article say that Harvey switched votes just to come to a resolution?

I think Johnson's vote wasn't unexpected -- he supported Two Lakes during his second term, but when running for mayor this time around he seemed less convinced (specifically when we asked him about it in our editorial board meeting in the election run-up). The story notes that Johnson voted against adjournment in order that Speed could continue talking. (Hey -- Speed has *big* buildings in downtown Jackson. ;-) Speed was apparently speaking out of turn without a motion on the table, so Rhoads' motion to adjourn served to cut Speed off. But they lost that vote and the meeting ended somewhat abruptly, to hear it told.

My impression is that Mayor Johnson has gotten more educated on this issue, and the likelihood of a Two Lakes project ever happening, as many people have -- including all the mayors. The Corps is not perfect, but they clearly no longer want to be the ones holding up some sort of flood control, and they have been as long as they allowed Two Lakes to linger for years as the primary plan on the table. A lot of mistakes have been made on this one, but people are starting to wise up and start looking forward, and not put all the eggs in a basket that's unlikely to leave the barn (to really muddle a metaphor).