The 2009 JFP Interview with Dorothy Benford 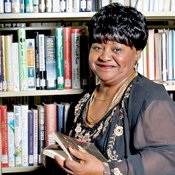 Jackson resident Dorothy "Dot" Benford seems to run for office almost every time an election year comes around. She has a small list of unwavering supporters and an ant's determination to topple a rubber-tree plant.

Benford has been a politically active Democrat for a long time. She worked on a number of campaigns, including the campaign for Sen. Henry Kirksey and the 1988 Democratic presidential nomination of the Rev. Jesse Jackson.

She is also one of the more passionate political operatives. Observers claim she mowed down campaign signs for then-Second Congressional District candidate Mike Espy in 1988, whom she was running against. That was a very busy year for Benford. She also got hit with a misdemeanor assault fine for thumping Mike Alexander, Jesse Jackson's state campaign coordinator. She later received a $1,000 fine for smashing his windshield with a hammer.

Benford said she usually doesn't do interviews, but she made an exception for the Jackson Free Press.

What's your main goal when you step into the office?
The main goal is to reassure the citizens that Jackson officials are com-petent and capable of running the city of Jackson.

Is there a problem with the officials we have here now?
I think that somewhere along the way citizens have lost confidence in some of our leaders.

What's your plan for dealing with the crime issue?
I plan to select a full-time police chief. I had planned to offer the police/sheriff (Malcolm McMillin) to take the position full-time and allow the sheriff position to go. But he's been replaced, and if he has no desire to be a full-time chief, then I would naturally have to get someone else. I would also build a police department so strong that it can withstand the new political winds that blow every time we hold an election. I would frequently evaluate every member of the police department and assess the changing needs of the department.

I would also promote people in the department based upon those evaluations and merit. There would be no favoritism or nepotism in the promotion of individuals.

Do we have enough police?
I think we have an adequate number of police officers. We need police officers that are committed to doing the best job they can do with what they have to work with. Each police person should know what his job is and how to respond to various situations. I feel that they should work more together in taking care of the ward, but I don't know all the details on how the police officers operate. I know I frequently see two or more officers converging too often in Ward 4. They just sit in their cars and talk.

I would like to have retired police working as reserve officers. No, they're not paid positions, but the positions serve a role. They work football games and events where a police presence is necessary. They're very important.

What's your take on city efficiency?
The day that I walk in I will begin evaluations of all employees, and find out what the needs are within the departments. From that point, if a person is performing satisfactorily, then that person, naturally, can retain that position. If I feel there should be some improvement, I'll try to work with that department head, or put that person in another position and select a new person.

What's your plan on dilapidated property?
I think the city is moving rapidly in destroying houses that could be restored. When you wipe out entire neighborhoods, you're getting into gentrification and moving people out too quickly. The restoration of neighborhoods is a much better avenue to take, but there are many houses that do need to be destroyed.

Still, I think that preserving our community is a priority. When you become an old lady, it's good to be able to go back to your community and see where you grew up rather than seeing a skyscraper or some other building, or an empty area.

We don't want to destroy those things that are of value and should be preserved.

How would you pay for these renovations?
I don't want to say that I have an idea about that, because I don't believe in just saying anything. I would instead wait until I could look at the situation and study the situation, and see what avenue could be taken.

The way I look at things is you take the budget that you have, you take the money and resources that you currently have, and you do the best job that you possibly can do with those resources. I remember Head Start and social programs like that enacted by Lyndon Johnson. There was never enough money—and there is never enough money—but those people who worked in those social programs did the best they possibly could do with those kids. I believe in reality. You take what you got; you do the best job you can do. But then, if you need additional resources try to do what you can to get them. But first you have to make sure you've done all you can with the resources you've got.

How would you encourage more businesses to the city?
I believe in hiring competent, professional people and giving those people the necessary latitude and resources to encourage business. In order for business to want to come to Jackson, the city will need people with money to spend. We're losing stores because the clientele that these businesses cater to are no longer in the city, and the only people left are the ones who can afford the little outlet stores. We need the income of Jackson residents to go up.

What are some of your other priorities?
I would like to see the city jail moved back into the city, because I think it doesn't make sense for a person to be arrested in Jackson, taken to Raymond, brought back to Jackson for court. That's a lot of expense. Plus, I feel that the city of Jackson should have its own jail. Jails represent resources, and those jobs and the opportunity to provide goods and services to jails should be available to the city. Most of these inmates are city residents. And another thing, when inmates are close to their families, your family can visit you. It's less expensive on your family, and you're probably treated better if you're closer to your family.

Naturally, we'll have to pay for it.
The city of Jackson has adequate resources to pay for a jail. We were paying for it before. I think that turning over the jail to the county was a mistake because it threatens the independence and sovereignty of the city. In general, it's not good to have middlemen dealing with our revenue, not even the Hinds County tax collector. Jackson needs its own revenue assessor, or to hire a person to work along with the county assessor. We should definitely collect our own funds.

And there are other social changes I'd like to make. You may not be old enough to know it, but there was a time when admission to the Jackson Zoo was free. We need to encourage families to go out and enjoy themselves and spend time with their families, but a family often can't afford to pay for four or five kids to go to the zoo. I'd also like to see the swimming area at the zoo back open again, and a picnic area. It used to be open years ago. We need an amusement type venue in the city again.

I have to ask this: What's the story behind accusations that you mowed down campaign signs for then-con-gressional candidate Mike Espy in 1988?
That was not true. I was in Yazoo, and I pulled up on the shoulder of the road, and the campaign sign waved. It didn't fall or anything, but at that time Mike Espy was the golden boy, and he could do no wrong. He was so popular, and Dorothy was the bad girl. My car, when it swished past it, it blew, and they went into a frenzy.

What about Mike Alexander's windshield?
That happened a long time ago. It would be inappropriate for your newspaper to go back to that particular point. I don't usually give interviews to newspapers. You know, when I ran for the tax assessor's race, I was in the runoff with Mike Barnes, and in the last election I had 12,000 votes, and the closest person to me had about 4,000 votes. In Jackson, if you're not a part of the Bennie Thompson machine or some other political machine, you are a threat. So when I learned how to put these grassroots coalitions together and became successful in it, I became a threat. There's always a different side to every story, but I'm not going to tell you on the record, what was really going on. There was more to that. There was more to all of that.

[quote]In Jackson, if you’re not a part of the Bennie Thompson machine or some other political machine, you are a threat. [/quote] That sounds familiar...