The 2009 JFP Interview with Jabari Toins 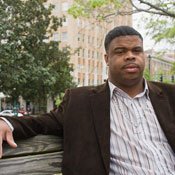 What experience would you bring to the mayor's office?
I know the state, and I know the state laws. I know about law also as a former employee with the state Department of Education.

What did you do at the state Department of Education?
I was a compulsory school-attendance officer. We handled Hinds County, and I monitored 13 Jackson public schools.

So you were a truancy officer?
Yes.

Why would you want to be mayor of Jackson?
I have been in the city of Jackson for 29 years. I grew up on Road of Remembrance Street (off West Capitol Street) in what used to be White Rock Apartments, which are no longer there. I grew up here in Jackson, and I saw how Jackson turned upside down under previous mayors. This pushed me to run for mayor.

Describe the transformation on that side of town. How has it turned upside down?
When I grew up here, all the houses were occupied. This was in 1994 through 1998. I went to Provine (High School). After I left, the neighborhood just went down. You hear mayors talking about revitalizing neighborhoods. They want to rebuild in the community and bring in businesses and all that, but I've never seen them do anything for my old area along Road of Remembrance. Look at it now, and the houses are a mess, and there's a lot of prostitution going on in those areas. I've got pictures of the decay on my Web site (http://jabaritoins4mayor.synthasite.com/). West Jackson, not just downtown, needs attention.

Can you put your finger on why the area went down?
Most of the elderly people who lived in the area moved out. The people got older and left. Who replaced them didn't care as much about what goes on in the neighborhood.

Sounds like more of a social problem than a political failing, don't you think?
If you're a city official, namely a councilman, you need to consider yourself responsible for your neighborhood going down. It's your ward, and you ought to know everybody in that ward. If a person is moving out, a councilman should know how long it takes to get someone back into that property.

Do you think a councilperson really has the kind of time in their day to keep tabs on everybody in their ward? Seems like a lot of people.
The council positions are part-time positions. They have council meetings every first Tuesday of the month. Why can't you monitor who's moving out of your ward and who's moving into your ward? You need to know what's happening with the houses in your ward. There are some houses in these wards with grass almost as tall as the houses on that land.

What do you suggest to improve the situation?
There's the financial aspect: The city uses too many contractors from out of town to do things when it should use the people that it has right here. We should have a city lawn service. There are elderly people who just can't mow their own lawns, and you have people who can't afford a lawnmower, so the city should be ready to hire people to do it, just like government hires contractors to mow the grass along the highway. These are jobs that could go to Jackson residents.

I'm not saying eliminate all city contracts and hire nothing but Jackson residents, but regarding the housing situation in Jackson, we need to have a city-financed lawn service in Jackson. They should be able to call us for help to keep down the grass, and we need to be able to send out people to do it. It keeps property values up, and we need to do all we can for that.

You said you had worked for the state Department of Education. What do you do these days?
I do T-shirts. I did some wind suits for the Blackburn Middle School cheerleaders. It's a home-based company.

What are some of your other priorities as mayor?
Having been a state worker, I've seen a lot of people who can't afford medical expenses and can't get Medicaid. I'm considering creating a free clinic for Jackson. I hate to hear people say, "I can't afford to get sick."

How does the mayor arrange for this?
As mayor, one of my goals is to try to get grant writers. I've seen a lot of grants out there for health care. I'm willing to hire some grant writers to get the funds to open this free clinic for our citizens. This is a high priority because I've been one of these people who can't get Medicaid, or who can't afford the medical expenses, and I'm not the only one. Many hospitals now won't even take you if you don't have insurance. They'll turn you around if you show up without it.

What are your plans for the police department? What improvements would you make?
The news recently said that Tyrone Lewis is the new police chief for the city of Jackson, but my top person would be (Assistant Chief) Lee Vance.

What's your reason for that?
No particular reason, but people who have been in the department a number of years have been pushed out of the way to give Lewis the opportunity to be chief, just so Mr. Melton could have someone close to him over the department. A person who has leadership doesn't mean they can lead, but how will you ever know if you don't give that person the opportunity to show you he can lead? Melton said on the news he wanted someone close to him. That shouldn't be the reason to make somebody chief. Vance would be my first choice. As far as everybody under him, they can re-apply for their positions.

You've spoken before on increasing the number of police in the city. How many do we need?
I'm shooting for 700 or 800 police officers. I feel like every ward should re-assess its own crime plan. If it turns out that South Jackson is reducing its crime figures and West Jackson's crime has gone up, maybe we need to see how South Jackson's doing it, so we can all share the same success.

But getting back to the 700 or 800 officers, I'm not talking about police to just drive around. I want police who walk around and stick their heads into businesses' doors, letting them know that they're on the beat. I need them to get out of their cars, knock on doors and let people know that they are in the neighborhood.

How do we pay for the extra cops?
The federal government gives grants for the police department. I will hire more grant writers to look for money in federal grants programs that we can use, possibly $1 million or more. Like Jackson Public Schools—they asked for a $150 million bond. I would ask for the same thing for the city of Jackson. We can pay that money back within four years and have money left over.

How would you pay for that?
Again, we would try to find grant money. We're going to use every federal program that we can. We'll also try to stretch that $150 million bond that I proposed to pay for it.

Your Web site mentions a food pantry for the disabled and elderly.
Yes. I was an eligibility worker doing food stamps for the state Department of Human Services. The elderly only get $10 a month. I heard President (Barack) Obama's stimulus money would push that up, but I don't want our elderly or disabled to have to decide between medicine and food. As mayor of Jackson, I would work with Mississippi Gov. Haley Barbour to see how we can come together on the state and city level to establish the food pantry or maybe get state matching funds.

I understand you're also looking to establish some kind of program for dropouts. Can you talk about that?
The problem with No Child Left Behind is that if the children do not pass the standardized exams, they get left behind. I would want to get with the Jackson Public School Board and the superintendent and say "let's test our children when they go into the seventh grade," because some may already be on a degree track, and some may be on a vocational track at that grade. Some aren't learning as fast as others.

I have been in the city of Jackson for 29 years. I grew up on Road of Remembrance Street (off West Capitol Street) in what used to be White Rock Apartments I grew up in west Jackson too and I remember White Rock Apartments being on Country Club Dr not Road of Remembrance. How is a guy who can't even remember where he grew up going to ask that all the councilmen remember all the people that live in their ward? That's even more silly than his plan for a city lawn service or getting a million dollar grant to pay for another 400 police officers. I especially liked his reasoning for his pick of Lee Vance for Police chief and his plan to fix the problem of kids failing standardized tests with more testing. Brilliant! I think Mr. Toins is just looking for his next government job. Maybe he should try dog catcher first.