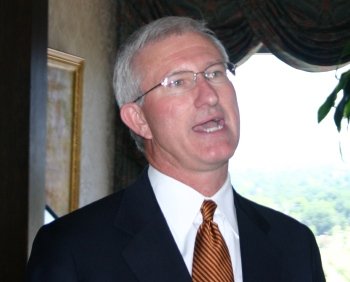 Sen. Roger Wicker's supporters at the National Republican Senatorial Committee are attempting to link his Democratic opponent, Ronnie Musgrove, with incarcerated lawyer Paul Minor, as well as Mississippi attorney Richard "Dickie" Scruggs, who pled guilty this year for attempting to bribe a Lafayette County Circuit Court judge for a favorable ruling in a dispute over $26.5 million in legal fees from a mass settlement of Hurricane Katrina cases. A U.S. District Court found Minor guilty of corruption in March 2007 for racketeering and bribery, along with former Judges Wes Teel and John Whitfield, for accepting the bribes.

"Paul Minor and Dickie Scruggs: trial lawyers who gave thousands to Ronnie Musgrove's campaigns," the NRSC ad states. "... Minor had so much influence with Musgrove, insiders called him 'the judgemaker.' Now Minor and Scruggs are in jail, convicted of trying to bribe a judge. Ronnie Musgrove: a record that makes you want to blush."

Adam Bozzi, spokesman for the Musgrove campaign, said Musgrove has not received any contributions from either of the two during his Senate campaign.

"The money they're referring to is from five or 10 years ago, maybe even longer. At the time there was no reason to suspect it," Bozzi said.

A federal jury convicted Minor of corruption in 2007, and Scruggs in 2008, well after Musgrove's 2002 campaign. Scruggs also donated money to Republican campaigns, including those of his brother-in-law, former U.S. Sen Trent Lott, who retired the day before Scruggs was indicted last year..

Bozzi said the ads are "an attempt to cover Roger Wicker's Washington practices of the corrupt 'Pay-to-Play' system," the system of heavy lobbyist input in the creation of legislation. "He's funneled millions of dollars in taxpayer earmarks to his top contributors," Bozzi said.

A January Washington Post article revealed that Wicker, last year, obtained a $6 million earmark for a defense contractor, Aurora Flight Science, whose executives were among his top campaign contributors. Wicker's former chief of staff even represented Aurora concerning the earmarks.

Minor's attorney Hiram Eastland said the use of the ads lends credibility to his accusation that Minor's prosecution was politically charged.

"The NRSC ad simply verifies that this has been a political prosecution all along, and the Republican Party is continuing to use these prosecutions to further their political goals," Eastland said.

Mississippi Supreme Court Justice Chuck Easley said he believed DOJ agents were aiming investigations only at Democrats during the height of Minor's trials.

"One agent interviewed me about possible investigations, and I had a ton of dirt on a lot of people, but they said they weren't interested in them. She said they were only interested in me, (Supreme Court Justices Oliver) Diaz and (Chuck) McRae, not (Jim) Smith, (William) Waller or anybody else. They were only hunting people they thought were Democratic oriented," Easley said.

The DOJ routinely leaked investigation details to the press throughout the investigation, notably details pertaining to Democrats.

Ryan Annison, spokesman for the Wicker campaign, said he knew nothing about the ads and directed all calls to the NRSC. "Not only do we have nothing to do with them (the NRSC), but it's illegal for us to have anything to do with them. We learn about them the same way you do, by watching them on TV," Annison said.

Rebecca Fisher, communications director for the NRSC, did not immediately respond to information requests.

Minor, Teel and Whitfield are appealing their convictions, arguing that Republican-appointed prosecutors, working with Ronald Reagan-appointed U.S. District Judge Henry Wingate, convinced the court to push a corruption trial without proof of an exchange of goods money or services, or quid pro quo.

The jury convicted Minor specifically of financing judges' campaign loans in exchange for favorable rulings, though none of the judges requested to oversee any of the cases Minor was working on. Also, prosecutors did not have to prove that either of the judges' decisions in Minor's cases were illogical. None of the plaintiffs in the cases in question, for that matter, filed to remove the judges for suspicious behavior or political connection with Minor.

The U.S. Congress is currently investigating allegations of political-based prosecutions by the DOJ under President George Bush and former White House Chief of Staff Karl Rove. Rove is ducking congressional subpoenas to appear before the congressional committee regarding the investigation and is currently in contempt of Congress.

Minor is not the only attorney charging the DOJ with targeting Democrats. Former Alabama Gov. Don Siegelman, who was convicted of corruption in 2006also without the necessity of proving quid pro quois out on appeal alleging political persecution. Siegelman is petitioning Congress this week to get Rove's contempt citation up for a vote and is pushing votes for final passage.

"We know Rove's master plan for his America was to create a permanent Republican majority ... apparently by any means necessary. Rove has praised his 'friend' Harriet Miersthe same Harriet Miers who has now admitted she broke the law in stacking the U.S. Department of Justice with Rove clones. She has admitted creating a right-wing political litmus test even for those (who) worked at the lowest levels of DOJ," Siegelman wrote in a Sept. 24 letter.

"We know that U.S. attorneys were used to prosecute seven times more Democrats than Republicans; we know that U.S. attorneys like David Iglesias were fired because they wouldn't play along with this White House's attempt to shape the outcomes of elections; we know from sworn testimony that Karl Rove was involved in using the DOJ as a political weapon to destroy Democrats who were unbeatable at the polls."

Siegelman accuses Rove of working with Alabama Republicans to tamper with state voting machines, which switched votes to Siegelman's opponent in 2002oddly without affecting any down-ticket races. Voters who chose Democrats on every other race mysteriously voted for the Republican gubernatorial candidate after Republican operatives were left alone with voting machines on the night of the election.

A new 356-page report from the Department of Justice's inspector general and the Office of Professional Responsibility outline charges of alleged politicization of the justice system by the Bush administration.

The report, "An Investigation into the Removal of Nine U.S. Attorneys in 2006," contains a painful assessment of then-Attorney General Alberto Gonzales and concludes that political considerations played a part in the firings of at least four of the nine prosecutors, despite the denials of the administration at the time of the controversy.

I guess this would be a good time to mention that I AM SICK OF ALL THESE ADS! All of them, not just from certain candidates. Election fatigue is kicking in...