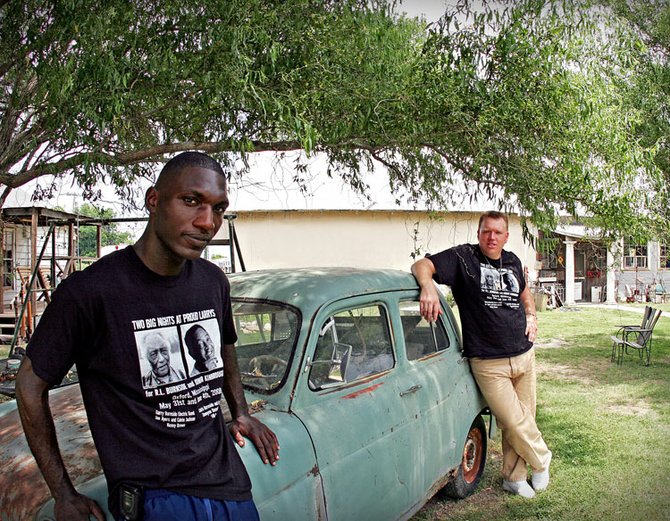 With a debut album and an energetic live show, Cedric Burnside (left) and Lightnin' Malcolm are ready to show the world their twist on hill-country blues. Photo by Courtesy Delta Groove Productions

I first saw the Juke Joint Duo in 2007 in Clarksdale at My Brother Sports Bar, a dim, smoky dive nestled on 3rd Street just around the corner from Morgan Freeman's Ground Zero Blues Club. The scant floor space in the front of building was barely enough to fit Cedric Burnside's simple drum kit, Lightnin' Malcolm''s bulky frame and the patrons' safe passage through the front door.

Burnside stripped down to a simple white tank top and started banging incessantly on his kit, wailing a tribute tune carrying the name of his famous grandfather, the late North Mississippi bluesman R.L. Burnside. Lightnin' Malcolm, with his eyes closed and head tilted back, joined in on his beige Fender Stratocaster as the pendant on his necklace  "the letter "M" with a lightning bolt through it  swung in sync with his belly.

A few songs into the set, the crowd  whose size undoubtedly broke every stipulation in the Delta town's fire code  was dancing everywhere one could fit flailing arms and legs.

"Mississippi hill country blues is a lot more basic than other blues," 34-year-old Malcolm says. It's about the groove. "You don't have a lot of chord changes. It's more about the rhythm.

Burnside, 30, has performed the hill-country blues style at Mississippi Delta juke joints with a rotating crew of family members and established blues artists since his grandfather  "Big Daddy" and Cedric calls him  bought him a drum kit when he was 13. In 2005, Burnside hooked up with Malcolm, a burly guitarist from Springfield, Mo. The two started performing hill country blues under the moniker "The Juke Joint Duo," with Burnside on drums and Malcolm, whose real name is Steve, playing bass and guitar.

"You aren't making a lot of money, so half of the time in a full band, some of the guys won't show up," says Malcolm, who alternates vocal duties with Burnside. "You have to learn how to play with what you got. There's a lot of songs we do now, that I never would have thought we would do with just a two-piece band."

After spending three years tightening up their live show, success for the duo came, well, lightning fast. On May 9, Randy Chortkoff, CEO of Los Angeles-based Delta Groove Productions, saw the duo play a show at Ground Zero in Clarksdale. He signed the band that day.

"I had already decided who I was going to put out records on for the rest of this year," Chortkoff says. "But when I saw Cedric and Malcolm, they blew me away."

Within two weeks, the band was in a Nashville studio recording a full-length album with Grammy Award-winning producer David Z, who has worked with Etta James and Prince. The entire recording process took two days. By Oct. 21, the band had dropped their album, "2 Man Wrecking Crew," with 14 original songs.

The new album features simple drumbeats and driving guitar licks. Hearkening to the tandem's Spartan style, Malcolm's guitar and Burnsides drums are the primary focus, though famed harmonica player Jason Ricci makes an occasional appearance. Absent is the brooding, delayed crooning perfected by R.L. Burnside and so often associated with blues music in pop culture, each sad lyric introduced by the sporadic twang of the acoustic guitar. For the duo, even songs with more solemn lyrics  like "She Don't Love Me No More" and "Time to Let It Go  carry the same steady, up-tempo rhythms that help prop up the flourishes of funk and hip-hop found throughout the album.

"People don't really care about guitar solos," Malcolm says. "They care about being able to dance to the music. If the people ain't dancing, there's something wrong."

The two-piece blues-rock band is nothing new to mainstream music  The Black Keys and The White Stripes have made the concept an iPod favorite. Yet despite the similarities in sound with these Midwestern bands, this tandem oozes authenticity, capturing the energy of the juke joints so crucial to the development of modern blues music.

"That's all I grew up around mostly, the hill country blues," Burnside said. "It's in my blood, and my main guy is Big Daddy. I'm ready to spread to the people that he taught me well."