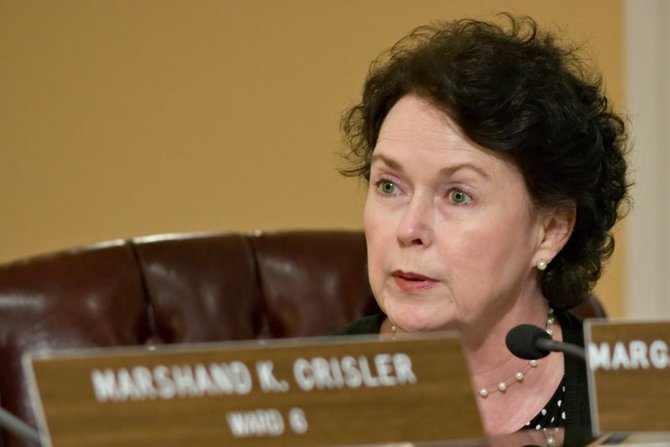 Ward 7 Councilwoman Margaret Barrett-Simon and other council members never got a say on the city's water contract. Photo by Kenya Hudson

Ward 6 Councilman Marshand Crisler said he was not sure if the mayor had the authority to extend the contract for three years.

Garrett Enterprises owner Socrates Garrett, who currently holds the city water contract with business partners Birmingham-based Severn Trent Environmental Services, said the terms of the original contract allow indefinite extensions so long as both the city and the contractor agree to the terms.

The extension ends the Jackson City Council's deliberation over two potential contractors: New Jersey-based United Water Services and Severn Trent. It is not the first interruption. The Melton administration delayed submitting the two proposals for a vote with the council twice last month.

The mayor first cited concerns about the bidding process, complaining that council members were attempting to influence Public Works recommendations. Later last month, Public Works Director Thelman Boyd informed the council that one of the competing contractors had renegotiated its price, again delaying the council vote.

"The water vote was listed as an order on the official council agenda, but they didn't have it ready, or city legal hadn't turned it loose," said Ward 7 Councilwoman Margaret Barrett-Simon.

Severn Trent has operated and managed Jackson's three waste-water plants and 93 sewage-pump stations for 25 years at a cost of about $5 million per year. However, Public Works recommended to the council earlier last month that it award a new contract to United Water Services for $2 million less for five years. United Water currently holds water/sewer contracts for the city of Laurel and Desoto County.

"After careful consideration, the City of Atlanta and United Water have agreed that the 20-year contract is not in the best interest of either party," Franklin stated in a 2003 city press release.

Henning pointed out that the Atlanta matter was a long time ago.

"This is 2008. Atlanta was 2003," Henning said. "That's digging back. United Water has a long, proud history regarding its public-private contracts. Right now we serve more than 260 municipalities throughout the U.S. and we have a retention rate of more than 99 percent on these contracts. The entire industry only has a 90 percent retention rate. That speaks for itself in terms of our ability to work with the communities."

Henning said the company also offers community aid, such as adopt-a-school programs to communities where they provide service, and has more than 140 years of experience in water works to bring to the city of Jackson. Henning would not comment on Severn Trent's decision to adjust its bid, though he said the bid proposals were supposed to be sealed.

Garrett compared the price change to simple negotiations. "It was not a hard bid. The city always had the option to choose a contractor and adjust prices through negotiation," Garrett said.