Dioxin Back on Trial 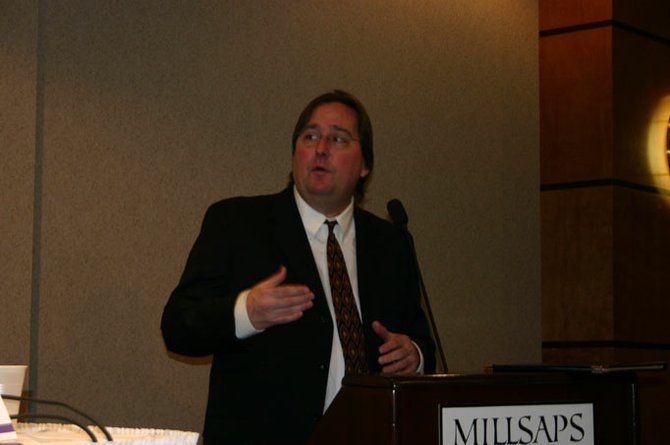 Matt Steffey said DuPont may have sabotaged a Jones County lawsuit to get it into Mississippi Supreme Court. Photo by Adam Lynch

One year after a Mississippi Supreme Court jury overturned a $15.5 million jury award for Bay St. Louis couple Glen and Connie Strong, their toxin tort case is moving forward. Both blame Glen Strong's rare form of cancer on dioxin released by a DuPont titanium-dioxide plant within five miles of their home. The Mississippi plant is the second largest titanium-dioxide manufacturer in the U.S.

The couple successfully won their suit against DuPont in 2005 after a Jones County Circuit Court jury found DuPont liable for Strong's multiple myeloma, a rare blood cancer that normally hits people in their 80s. Strong was 44 at the time of his diagnosis, however. The Supreme Court overturned Strong's jury verdict and ordered Jones County to schedule a new trial.

Strong, an oyster fisherman, claims eating oysters from the Bay of St. Louis exposed him to lethal amounts of dioxin. The January 2005 edition of the Journal of Shellfish Research published a report showing the highest concentrations of dioxin in Bay St. Louis sediments "in closest proximity to the effluent outfall from the ... (DuPont) refinery." The report, based on samples collected in 2004 and analyzed by Paradigm Analytical Laboratories in Wilmington, N.C., recorded dioxin and furan contamination up to eight times higher than that in samples collected from seafood markets and grocery stores in southern Mississippi in 1997. The same report showed that chromium in St. Louis Bay oysters in 2004 was at least 1,167 percent greater than the values recorded in 1978, the year preceding the arrival of the DuPont plant. The percent value for nickel in the same oysters in the bay was at least 467 percent greater than the 1978 value.

DuPont attorneys called the report "junk science" in a 2007 Sun Herald article, and argued the court had a failed to "offer competent proof" of whether Strong's illness was a direct result of exposure to DuPont's dioxins.

"There is no connection between our activities at the DeLisle facility and any health issues alleged by the plaintiff," said DuPont attorney Mary Kate Campbell Tuesday, adding that other studies contradicted the Journal of Shellfish Research article. "The writers of that study were retained by the plaintiffs, but DuPont maintains that government and regulatory agencies are better able to provide credible information. The MDEQ conducted their own testing in the bay and they've stated that the dioxin levels were not at levels of concern."

The Supreme Court based its ruling partly on errors involving the Circuit Court's striking of DuPont's witnesses. DuPont lawyers demanded a review by the state Supreme Court, claiming the court unfairly denied the company calling experts to testify, including scientists and health professionals, who they claim could have shot down Strong's case.

The judge sanctioned DuPont for violating a judicial order to produce witnesses for plaintiffs in the case, according to an October 2005 article in Lawyers Weekly USA. And, although DuPont had dozens of others on their witness list, Strong's attorney Allen Stewart, of Dallas, said DuPont chose not to call any of their own witnesses, and instead resorted to cross-examination of plaintiff witnesses.

"DuPont had 83 witnesses on their witness list. Only nine of them were struck by the court: nine that they didn't make available when the court ordered them to make them available," Allen told Lawyers Weekly USA in 2005.

Neither Stewart nor Strong could be reached for comment.

Mississippi College School of Law professor Matt Steffey said DuPont could have been using a tactic to drag their feet and delay or sabotage the circuit court case.

"They may have been trying to get that case into a court that they feel would be more favorable to them," Steffey said. "Lawyers will sometimes try a case specifically to (facilitate an) appeal, because they know they'll lose the lower court case. Take the Exxon-Valdez (oil spill) case. Exxon-Valdez has lost that case on every level. Finally, they make their way up to the U.S. Supreme Court, the only forum in the U.S. where they could conceivably win. They've been litigating this case for 20 years, but if they can lose for 19 years and nine months, and win in the Supreme Court, they win for good."

The jury began hearing testimony last week in the Strong case, one of the first of almost 1,900 lawsuits concerning environmental pollution from the southern Mississippi DuPont plant.

Alan Muller is executive director of Green Delaware, an environmental organization critical of a similar DuPont plant in Delaware. Muller said the outcome of the Strong case will have an impact on the other cases waiting for attention regarding dioxin in Mississippi.

"There are a lot of eyes on this case," Muller said. "We're all waiting to see what happens with it.