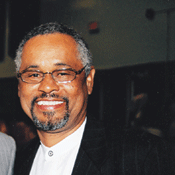 Garrett Enterprises owner Socrates Garrett, whom the city hired to remove debris following an April storm, said contractors have cleaned up about two-thirds of the mess

Garrett Enterprises owner Socrates Garrett said his company and subcontractors have already removed more than half the debris lining the streets after tornado winds tore through the Jackson area last month.

Garrett told the Jackson City Council Tuesday that he and subcontractors have removed about 120,000 cubic yards of logs, tree branches and assorted bramble since they began working April 24.

The progress report came two weeks after rumors began circulating that Jackson Mayor Frank Melton had forced Garrett's company into subcontracting a Louisiana business the mayor originally favored as the prime contractor to remove debris from the storm.

Melton denied the rumors at a recent press conference.

"There have been a lot of rumors going around, but the key players (in debris removal) are Socrates Garrett and (Integrated Management Services President) John Calhoun and myself. Those are the key players," Melton said.

"If there's any information you need, one of the three of us will do the best we can. ... The rest of that stuff; just forget about it, because it's about competition, it's about greed and it's about money, and I'm not going to put up with it."

Council members initially reported Pearl River-based Nungesser Industries was doing unauthorized debris removal in North Jackson earlier this month and warned the company would not be paid for its work if it was not properly contracted.

The Jackson City Council had picked Garrett Enterprises to remove the debris at $15 per cubic yard, but Melton made it plain to the council before their decision that he wanted Nungesser to have the contract.

Garrett, who had endorsed Melton's rival during his mayoral campaign, told the Jackson Free Press April 25 that his workers had identified Nungesser employees doing debris removal in North Jackson, despite Garrett Enterprise netting the city contract. By that afternoon, however, city officials had announced that the company had subcontracted with Garrett, even though Garrett had reported no knowledge of an impending subcontract with Nungesser that morning.

Garrett neither denied nor affirmed the rumor that Melton had threatened to pull his contract if he did not take on Nungesser as a subcontractor.

"Undue pressure shouldn't be brought to bear on the contractor to do business with a favorite subcontractor that the mayor has. There's been this interference, and this wishy-washy approach to public policy that is something the city of Jackson does not deserve," McLemore said.

This is not the first time the mayor's support for a specific contractor has come under question.

In 2007, Melton allegedly attempted to pull a Jackson Public Schools board member's re-nomination if he did not vote in favor of Integrated Management Services for a school bond manager contract.

We now have two messes - the storm debris and the way this contract has been handled.