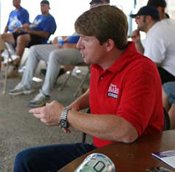 Administrators from two hospitals that have a no-refusal policy regarding patient admittance warned House members today that a hospital bed tax proposed by Gov. Haley Barbour will force cuts in hospital staffing and reduce services for their low-income patients.

"Many patients in the Delta are what we call 'no pay' patients," said Ray Humphries, CEO of Delta Regional Medical Center. "In the stronger economic areas of the state, there are privately insured patients who can absorb the increased hospital costs that will come of Barbour's proposed hospital tax, but in the Delta, the only way we can deal with reductions in reimbursement is to cut our expenses."

"(Barbour's) model isn't right because it's simply not fair. You have to ask the question, 'Who pays what tax, and what hospital gets diluted payments (from the government)?'" Marchand said, adding that he and the Mississippi Hospital Association had supported Barbour's plan until it became apparent how badly it would affect hospitals serving fixed or low-income areas.

"It wasn't until we got into the fourth or fifth iteration of the model that our concerns were crystalized because at that point, we began to understand what was going to happen to the residents of Harrison and Hancock Counties," Marchand said.

House members say they want to fill a $90 million hole in the state's Medicaid budget with a $1 increase on the state's excise tax on a pack of cigarettes and a tax on alcohol. Barbour, a former tobacco lobbyist who still receives money from his Washington lobbying firm, wants to impose a tax on state hospitals to fill the hole. House members and hospital officials said today that the hospital tax will likely get passed down to patients. Marchand and Humphries said that some hospitals will be unable to pass those costs down.

The House recently opted to compromise, asking for a 50-cent hike on the cigarette tax, coupled with a smaller hospital tax, but Barbour is threatening to make up to $375 million in Medicaid cuts if the House does not adopt his plan.

"I'm here today to ask the governor to put all the options on the table and negotiate," Baria told reporters at a press conference. "Let's fix this problem, fix our Medicaid shortfall, and let's go back home."

Baria later said he did not believe the Senate would take up either of the two bills during the special session this week.

Also today, tobacco cessation supporters released the results of a poll showing 80 percent of Mississippians support a tax increase on a pack of cigarettes over a fee increase at the hospitals.

"Among the options that are on the table, increasing the tobacco tax is clearly the preferred solution to the Medicaid funding crisis," said Mississippi Health Advocacy Program Communications Coordinator Jarvis Dortch.

"The polls show us, more than anything, that a candidate that supports this will do more favorably by voters, whether its a Republican or a Democrat who supports it," Lanne told the Jackson Free Press.

Barbour is into his second term as governor and cannot run for reelection, though the campaigns of his supporters in the House and Senate could be impacted by their stance.