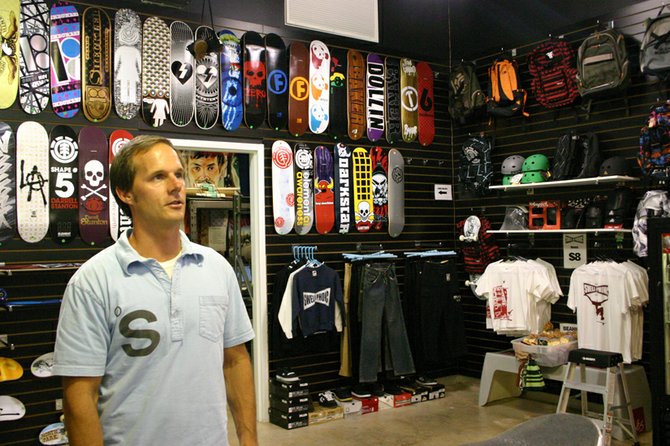 Whatever you do, don't call Swell-O-Phonic a skate shop; and definitely don't ask owner Chane, 38, his first name (Ron). For your information, it's a premier men's and women's clothing boutique/art gallery/music venue, which just happens to sell skateboards and house the most popular skate park in Jackson. And while he may indeed have a first name, no one would be caught dead calling him by anything other than his last, which has become synonymous with his screen-printing brand: Studio Chane. The former pro-BMX-racer-come-fashion-designer has been selling his cutting-edge T-shirts in markets all over the U.S. and abroad for 20 years. We think he can get away with a last-name ID; after all, he's earned it.

This year marks the 20th anniversary of your screen-printing/design business and the 10th anniversary of your clothing boutiques. How have your businesses changed over the years?
It started 20 years ago with only $150 and two-dozen T-shirts. The progression of what it is now is: Wilai, the ladies boutique; Studio Chane, which is a screen-print shop; Swell-O-Phonic; and then Icon, which will soon become its own store when we move (all four store spaces will rotate after renovations); and Swell-O-Venue which is out back and where all the skateboarding, movie events and concerts take place. We never set out to say, "Hey, I'm going to do this T-shirt line and then open all these stores." It was just an accidental progression. It was a platform for me to pay my bills and make some money while I could follow my dream to be a designer. One led to two, two led to three  and now I do business in New York  and I'm looking to the markets in London and L.A. It's turned into something bigger than we ever imagined.

So you split your time between Jackson and New York?
I'm roughly here (one) week a month, and up there three weeks. It's only my T-shirt line (in New York); I don't have a storefront. I'm part of two design markets; one in Soho, on in the West Village. So we do that and sell on the street. It's just the rawest form of retail and the perfect way to test market. It's just one focus: on selling T-shirts and being a designer. I go up there and have to mentally change the channel on the fact that I own stores. It took about a year and a half before I could even pull that off. But now I can leave it all up to (my staff) when I'm gone. I'm only as good as my staff is.  They are really like 75 percent of what the business image has become over the years.

How has the Fondren neighborhood changed since you moved in, and how has that affected your business?
"You better be careful because you might get jumped, it's all bad over there in Fondren!" That's what a lot of the Madison County clientele tends to think. The art venue has given us the opportunity to show them that it's really a great, growing community of artists and designers. When I first moved in here, there were slowly (fewer) empty spaces and less crime. Progressively there were artists and designers moving in and generating energy and feeding off each other. It's not about old money anymore and closed ideas.

Stop by in early August for the 20th anniversary celebration, which will coincide with the open house/unveiling of the newly renovated Wilai, Studio Chane, Icon and Swell-O-Phonic spaces. There will be 250 T-shirts given away, demos on the printing process, and music and local artists featured in the new gallery.