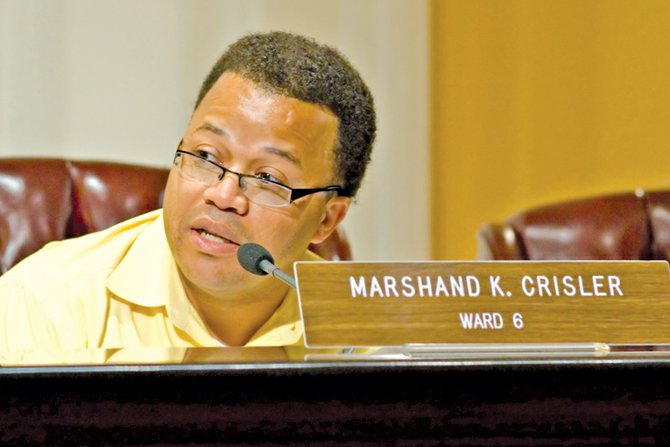 Even as hundreds crowded into City Hall Tuesday night, called to turn out by Mayor Frank Melton, the Jackson City Council failed to support the mayor's last-minute summer job program for city youth, citing lack of funds to pay for young people to work for private businesses. The vote was 3-3, with Councilwoman Margaret Barrett-Simon absent. "We're coming up on the end of our budget cycle, so that money is not currently budgeted, and so that is not very prudent to make financial decisions in that manner," Budget Committee Chairman Marshand Crisler told the Jackson Free Press. "I think it would be much more prudent for the mayor to make this suggestion at the beginning of the next budget cycle, and see if we can find moniesnot out of the general fund, but other locationsto fund this program for next year.

Melton inserted his request on the agenda over the weekend for consideration by the council Tuesday night. Melton wants the council to sign off on spending $600,000 from the city's reserve fund and a budget transfer of another $600,000 from a $6 million line of credit the city applied for to pay for debris removal after storms hit the city in early April. Melton did not return calls, but told The Clarion-Ledger that he believed the $600,000 would be reimbursed to the city fund next year. He did not outline how.

"These kids want something to do," Melton told the paper. "I can't wait until next year. It's something that has to be done now. These kids need jobs now."

Credit agencies look at the amount of money in the city's reserve fund, in part, to determine the interest rate of bond money the city borrows for projects, such as emergency infrastructure repairs. Crisler spoke strongly against funding the summer project with reserve fund money, and said Monday that he would not likely approve the budget transfer.

"There are some other avenues that we should approach, other than dipping into the reserves. That's usually a no-no. And also, it negatively affects your debt capacity  and borrowing. Obviously, we just borrowed $6 million, and the way we were able to that is (because we) were more responsible with our reserves," Crisler said.

Melton plans to use the money to expand the city's existing summer job program, which employs about 60 young people and has cost about $85,000 for the last three years. The program is funded, in part, through state and federal grants. Melton wants to increase the 60-employee head count to about 900, and was already working on the paperwork to employ the kids on Monday. Melton told reporters he had the support of three council members on the budget transfers. But he needs four.

The mayor's term ends in July 2009. He said he places a high priority on keeping city youth busy and is less concerned with the impact the new debt will have upon the city's ability to borrow money.

Crisler and Ward 2 Councilman Leslie McLemore have argued in favor of keeping a hard eye on the city's money. Balancing the budget has been no easy matter during the last two years, with the council fighting to make ends meet for city departments. Jackson Police Chief Malcolm McMillin reported last year that the city's police department had spent most of its overtime budget within a handful of months before he arrived as chief in November. The city has also had to close vacant positions to cover holes in the budget for the last five years.

Ward 1 Councilman Jeff Weill said he was also leery of moving more than $1 million into a summer jobs program.

"Government has priorities, and that's protecting the people and keeping the streets resurfaced, and we need to think very hard before going far beyond that," Weill said. "This $1.2 million that the mayor wants to spend is 20 percent higher than the entire city's resurfacing budget for 2008."

Weill said he had expected City Hall to be packed with people watching the council vote, but that didn't change his vote: "My e-mails are running 99-to-one that this expansion is an imprudent use of our tax dollars."

Crisler said he might favor an expansion of city services in a summer program if the program involved more of a public/private partnership, where the city offers placement services for youths with local businesses rather than financing their paychecks.

The Ledger just posted a story about the plan being killed. This part tickled me in a sick way: Melton accused the council of playing politics and killing the program out of personal dislike for him. "Now they will have to be accountable," he said of the council members voting against the program. "I'm going to get the money for the kids." City Administrator Rick Hill said the money to pay for the program would have to be borrowed from the city’s $7.3 million reserve fund and paid back over the next three years. Melton said he would pay the money back by cutting money from two of his least-favorite governmental entities — the Jackson Redevelopment Authority and J-TRAN. Melton said he will take his proposal with him on a trip to Houston this week to meet with oil executives at ExxonMobil in a search for outside funding. The mayor would not name the executives. That's something else. He is not only using this plan to try to make his political opponents look bad, which he essentially admitted, but he is also trying to use it as a way to cut JRA so he can get control of it—and perhaps re-direct more development to his Texas friends? That's ony a guess, but that's what he's tried to do in the past. These poor kids and families. Christopher Walker was right: They are such pawns. Melton is really, truly being a turd this time. That's the only word that comes to mind for him right now. It's so disgusting to use these kids like this. And what about the people who can't get to work when he cuts J-TRAN? Probably some of the parents of those same kids. Argh.

And what about the people who can't get to work when he cuts J-TRAN? Probably some of the parents of those same kids. I was kinda thinking the same thing myself. I don't know why he would want to cut JATRAN at a time when gas prices are so high and like you said, that may be the only means that those very kids Melton wants to employ can get to work. Plus, Melton himself was even promoting JATRAN as an alternative for him to go to work and now he wants to cut it? I don't get it. Well, actually I do. Melton definitely wants to make his opponents look bad and sadly, his supporters just don't think rationally and see how much of a pawn he's made them. I don't know what it will take for them to do so.

I truly understand his desire (real/fake) to help the community children earn money, but come on now! I have a vacant lot next to my house with grass almost as tall as my house. Community Improvement is short of manpower and I can't get anything done. I drove down Fortification Street today and darn near wrecked my little PT Cruiser just trying to make it to the highway. Apparently money is short there and we can't get repavement/repairs done. Good job, City Council. Hold it down!1

Amen honey2me, you could pick any street in the city and find the same problem. Also, what about those rasies Melton promised city employees? I guess he is going to take that to Houston as well.

And what is ExxonMobil gonna demand in return for this funding? Melton and Texas businessmen don't mix. See Gene Phillips.

Cut Jatran? With high gas prices and an increased need for mass transit, the mayor should be looking at expanding Jatran and trying to enhance available services. We should have formed a metro transportation committee years ago to look at expanding transit services beyond the city lines with increased hours.

Now, Melton is out for revenge on the whole damn city.

If they could expand JATRAN to include express routes to the outlying areas, I'd ride it every single day. We don't have a viable transit system now for the area, much less for Jackson itself. If they cut the budget anymore, they might as well kill the whole thing.

While it seems like a good idea, Jackson can't afford a tax decrease right now. The few resources the city has needs to go to things like road improvements, water & sewer improvements, police, etc. When revenue from ongoing downtown projects come to fruition, then the possibility of cutting taxes can be looked at then. Of course, Melton's using all of this as a political ploy, pretending to care about people here and have his die-hard supporters say that forces are trying to do everything to stop him (as they've done all along, especially since the Ridgeway Street incident). I seem to recall that there is a mayoral election one year from now and Melton is not very popular at the moment. If he really cared about young people having summer jobs and tax decreases, then he should've proposed them in his first or second year in office. Funny how upcoming elections make you find religion all of a sudden.

As long as Melton is mayor, we are living in a continual state of crisis.