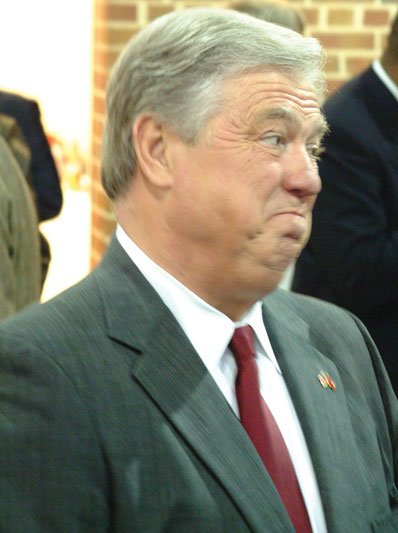 Barbour remained at a standoff with the House over funding a Medicaid shortfall on Tuesday. Photo by Jaro Vacek

The legislative debate stalled over Medicaid this week, with solution reached on where to get $90 million to fund the state health-care program. Gov. Haley Barbour warned that he will have to make cuts to Medicaid services starting July 1 if the House does not abandon completely the idea of a tobacco tax.

The Democratic-controlled House pushed during the regular session for a $1 increase in the excise tax on cigarettes, though Barbour, a former tobacco lobbyist, vehemently opposes the tax increase and has instructed the Republican-controlled Senate to likewise oppose the House's plan. Barbour, meanwhile, advocates a plan that would tax the state's hospitals about $160 per patient, per day.

Rep. John Mayo, D-Clarksdale, warned on his blog, however, that "no one, not Medicaid (officials), not the (Mississippi) Hospital Association, not Blue Cross/Blue Shield, no one has definitively told us that this tax will not be passed onto the paying patient or (that) health insurance rates will not go up when this patient tax is enacted."

During the special session, the House proposed a more modest 50-cent increase on the excise tax, combined with an equally modest drop in Barbour's patient tax, though the Senate and Barbour oppose even that. Seeing no immediate compromise, the House then passed a bill using $90 million from Barbour's prized $378 million "rainy day" fund if accountants decide Medicaid cuts are needed.

Barbour responded by promising a veto of the rainy day bill.

"nstead of taking up the fair and reasonable solution to fully fund Medicaid passed by the Senate ... the House has voted to use $90 million in one-time money to pay for the recurring expenses of Medicaid. The purpose of this Special Session is to enact a permanent, sustainable solution for Medicaid funding. The nearly 600,000 Mississippians who depend on Medicaid don't need a one year band-aid, but that's what the House leadership has given them," Barbour said in a statement.

The state's current tobacco tax stands at 18 cents a pack, which generates about $47 million for the state every year, according to American Lung Association of Mississippi Executive Director Jennifer Cofer. Cofer added that Medicaid spends about $264 million on Mississippi residents with smoking-related health issues like lung cancer every year and called the tobacco tax increase logical.

Barbour said he opposes any tax increase in the state until a special tax study committee thoroughly studies the state's overall tax structure later this year. Politicos predicted that Barbourwho opposes a tobacco tax increase every year lawmakers propose itwould use the tax study to mire a tobacco-tax proposal.

"The governor should wait and call us back in September when we will know the recommendations of his own special tax-study committee. Any proposal to add taxes on to hospitals and their patients should certainly wait until that report is made," Flaggs said in a statement, adding that the 2008 Medicaid deficit is nothing compared to past deficits.

"I will not be intimidated into voting for only a hospital-bed tax," Flaggs said. "We have many alternatives, including the cigarette tax and taking the money from the rainy day fund."

So far, the Legislature has resolved a bill facilitating the construction of a toll road between Jackson and the Jackson-Evers International Airport in Rankin County, a metal-theft bill more palatable to metal recyclers and $88 million in inducements for a federal biolab endeavor pushed by U.S. Rep. Bennie Thompson, who chairs the House Homeland Security Committee.