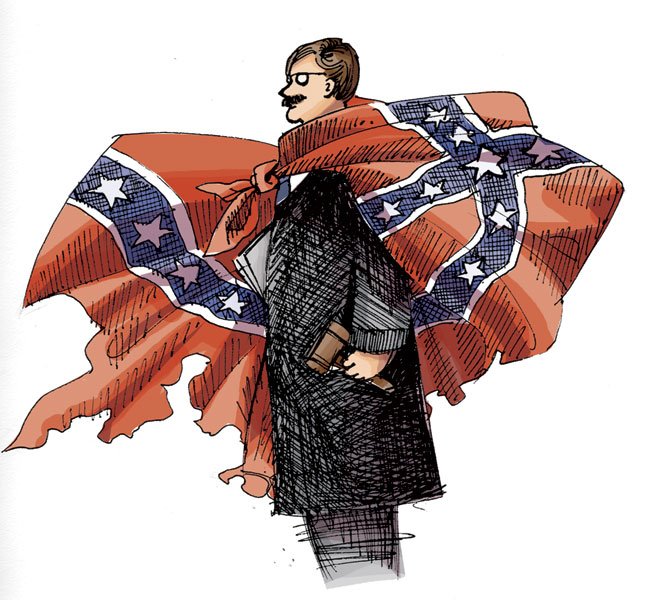 DeLaughter attracted national attention while working as an assistant district attorney under Hinds County District Attorney Ed Peters, during his prosecution of white supremacist Byron de la Beckwith. In 1994, a jury convicted Beckwith, who had Ku Klux Klan ties, of shooting down civil rights leader Medgar Evers in 1963. DeLaughter later wrote a memoir called, "Never Too Late," recounting his emotions during the prosecution.

The FBI is currently investigating DeLaughter's connection to Peters. Mississippi attorneysincluding Richard "Dickie" Scruggsrecently pled guilty to U.S attorneys of bribing Judge Henry Lackey, and recounted to authorities how they used Peters to proposition DeLaughter for a favorable ruling in his court.

Aside from financing the preserving of Civil War-era Confederate flags, the Sons of Confederate Veterans worked in Mississippi to defray the costs of defending the controversial 1894 state flag design during a failed 2001 campaign to replace it, and helps organize the annual Confederate Memorial Day in Greenwood. A prospective member of the camp must be able to prove kinship to a Confederate soldier in order to qualify, and DeLaughter submitted his kinship with Mississippi Infantry Private Robert Prine.

The organization has long been populated by history buffs with a love of Civil War reenactments and little desire to influence current politics. Despite lauding the efforts of Confederates to secede from the union more than 130 years ago, the organization routinely renounces white supremacist groups such as the Ku Klux Klan, and routinely opposes the KKK's use of the Confederate battle emblem in its public demonstrations.

DeLaughter could not be reached for comment, but in joining the SCV, DeLaughter is joining a Civil War awareness group racked with its own civil war.

"There is a struggle between the so-called 'lunatics' and the 'grannies,'" said Southern Poverty Law Center's Intelligence Project Director Mark Potok. "The lunatics are the extremist faction. They are led by people like Kirk Lyons, who is running for the Army of Northern Virginia board of the SCV, but he's a white supremacist attorney who lives in Black Mountain, North Carolina ... who specializes in defending confederate symbology in the courts. This guy was actually married on the grounds of the Aryan Nation's neo-Nazi compound up in Idaho. There's a lot of racist history with him."

Walter C. Hilderman, co-founder of the group Save the Sons of Confederate Veterans, wrote on the SCV Web site that "the SCV's mission of Confederate heritage guardianship is being transformed into modern political extremism that often has little to do with defending the proud record of the Confederate soldier."

SCV Department Councilman Charles E. McMichael, for example, was a member of the since-disbanded organization Free Mississippi, defined by the SPLC as a hate group. In a 2001 report, the SPLC identified current SCV Lt. Commander-in-Chief Ronald E. Casteel as a member of the neo-Confederate group League of the South, as well as SCV current Army of Tennessee Department Commander Charles Kelly Barrow.

"The most important goal in the SCV should be the remembrance and promotion of Confederate heritage and history, but it has lost that," Hilderman told the Jackson Free Press. "It's lately suffered what's called in the military as mission drift."

Hilderman said many new SCV recruits aren't satisfied with merely promoting the remembrance of Confederate heritage, but seek to take an active role in modern politics, with some members even advocating a new secessionist movement and racial separation. He said the behavior of the new faction is helping the media taint the SCV as a racist organization.

"Liberals have all along defined the SCV as a bunch of racists and a bunch of neo-secessionists for decades and decades, but in the last 10 or 15 years the SCV has allowed some of those folks to move into the organization. The SCV is so determined not to pursue a purge that they'd rather run a bunch of guys off who are interested in pursuing it," Hilderman said. He added, however, that the effort appears to be "a top-down" transformation that may not affect the local organization.

"None of that is happening in our camp," Eaton said. "There was a movement two or three years ago to become more political, but locally we said no. That is not the charge we were given.

If he did anything wrong or Scruggs-like while on the bench, hopefully this won't be the only new group he'll be joining soon. Charlie Reese has become my friend of late because we share sentiments about republicans.

I have to add the rest of the story here. We knew about this because the SCV newsletter came to my home mailbox, addressed to a former resident, I guess. I had run into the group during previous neo-Confederate research I did about the extremists associated with the group. It's interesting to the little "civil war" within the group, and it does surprise me that a sitting judge would join a group that is even dealing with such controversy in its ranks.

Why did this story get run? I mean outside of Bobby's impending legal troubles, and the allure of waving the evil old losers pendant around... Is there a problem here?

It's here because it's an interesting story about an elected official. That elected official—a judge—has joined a controversial organization that idolizes the Confederate flag, and that has attracted much attention due to "neo-Confederacy" in its ranks. That is clearly a story. Readers can decide for themselves whether they think it's a "problem." Clearly, some will. Some won't.