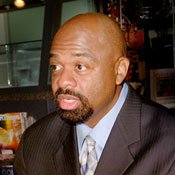 Justice James Graves will be the first African American from Mississippi on the federal appeals court.

Pointing out that Gov. Haley Barbour has not appointed one black judge out of 18 judicial appointments to date, two attorneys and a Supreme Court justice agreed at a Saturday meeting that Mississippi's electoral process for deciding state and local judges was superior to a system of appointing judges.

Jackson attorney Carlton Reeves warned that the state should adhere strongly to the election process for the sake of diversity.

"As of today the governor has made 18 appointments in county court, chancery court, the court of appeals and the Mississippi Supreme Courtand I know African Americans have appliedbut today not one African American has been appointed," Reeves said. "Many judges have put themselves up for elections, including Judge Graves, or Judge Irving on the Court of Appeals during the years Barbour has been in office, but winning elections seems to be the only way you guarantee diversity on the court."

The League of Women Voters of Mississippi and Common Cause of Mississippi held the meeting as a first-step analysis of the League's 2005 decision to support a merit selection/election retention system as the means for selecting Mississippi Supreme Court and Court of Appeals Justices.

The merit appointment system involves a panel convening in order to pick the most qualified individual to hold the position, followed by an election that allows voters to approve the panel's pick after the judge serves his or her first term.

The League's argument centers on the issue of court fairness, suggesting that few defendant attorneys care to be before a judge heavily financed by an opponent or political adversary.

Former Chief Justice Jim Smith, just defeated by Crystal Springs attorney Jim Kitchens, approached the Senate with his personal recommendation of appointing judges to remove the high influence of political money, though Smith repeated on the campaign trail this year that he never officially asked the state Legislature to vote on the possibility.

Out-of-state organizations like the U.S. Chamber of Commerce, which seek to reduce the number of successful suits against corporations, contributes heavily to Mississippi Supreme Court races. The court's decisions tend to be corporation-friendly and biased against plaintiffs, likely thanks to heavy contributions from the Chamber and its associated political action committees, which do not have to reveal the identities of its donors.

"If I were governor, and I had the power to create a commission by executive order, I would be very deliberate about making sure that commission was diverse, with Republicans and Democrats, and African Americans and whites, and men and women, but the governor would also need to commit to use the recommendation made by that panel and not make a purely political decision," Graves said. "The governor would have to have a diverse pool of people on the panel and defer to the wisdom of this bipartisan commission to make the process more likely to result in diverse people getting appointed."

But even Graves, who claims to have heavy opposition from pro-defense-attorney organizations like the U.S. Chamber, was not ready to completely supplant the election process with an appointing panel. "I find the electoral process more appealing, standing before the people offering myself up asking for their vote and asking for their support."

Still, the voters are getting swayed by outside money, according to attorney Alex Alston Jr., the third member of the panel, who wrote extensively about the Supreme Court's growing bias against plaintiff lawyers. Alston claimed earlier this year that the Mississippi Supreme Court reversed almost 90 percent of all jury verdicts in favor of plaintiffs and that plaintiffs' success rate in reversing a jury verdict for the defendants has been zero within the last four and a half years (the pinnacle of U.S. Chamber of Commerce influence in Mississippi court races).

Alston said Mississippi was going to continue elect its judges, because trying to take away elections was akin to "killing somebody's child" for Mississippians. He also did not disparage the elections themselves, but did offer suggestions for public financing of some court races.

"I know it sounds crazy, because why would you want to have 5,000 state-financed lawyers running for Graves' position, but maybe the state could determine eligibility by meeting some financial requirement," Alston said.

Alston suggested that the state could mandate that candidates earn $50 in separate contributions from at least 8,000 Mississippi residents before qualifying for state financing. "If you could narrow it down to a handful of people you could have just four ready to run, and they couldn't accept a penny from anybody except the state of Mississippi," Alston said. "There has to be a better way than allowing this evil money to come in, that's lying about these wonderful people running for judges elections. It's horrible. It eliminates a candidate by spreading lies."

Reeves said the issue of outside influence could be remedied by forcing contributors to PACs to reveal themselves, and pointed out that the state Legislature had attempted to address the issue by forcing anybody who gives more than $200 to report that money and disclose the sources, Reeves said. Republican Gov. Haley Barbour, a former lobbyist, killed that bill during the 2007 legislative session. Legislators, confident that Barbour would only kill a second attempt, did not submit a second version in 2008.

Reeves said one alternative could be to encourage to state bar to adopt a watchdog role regarding judicial races.

"The bar has taken some steps in setting up a commission to be the truth-vetters when there are misstatements in campaigns  but the bar could be far more aggressive, I think, in making sure that candidate A isn't lying on candidate B.