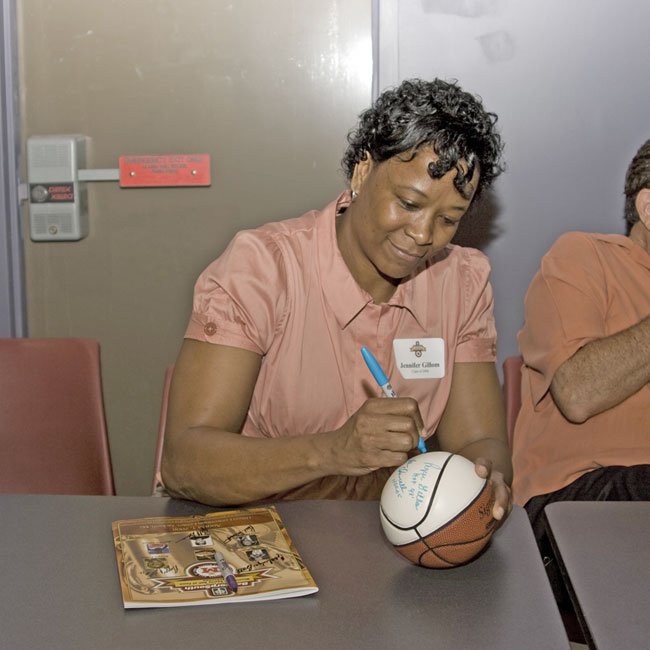 This past weekend, the Mississippi Sports Hall of Fame and Museum inducted six new members, including Jennifer Gillom. Originally from Abbeville, Gillom, 44, played for Ole Miss after high school under Coach Van Chancellor. In 1988, Gillom was on the gold-medal-winning U.S. women's basketball team in Seoul, South Korea. She went on to play 17 years in the WNBA while playing winter ball in Italy. After retiring from the WNBA, Gillom coached for four years at a Phoenix, Ariz., high school and now is an assistant coach with the Minnesota Lynx. Gillom found a few minutes to speak with the Jackson Free Press during the induction festivities.

Describe the feeling of hearing the national anthem in Seoul after winning the gold medal.
It's just something about that song that just shows why you wore that red, white and blue. ... Everyone in the world thinks America is a strong country and a country well represented. It meant so much to me to know that I'm doing well wearing the red, white, and blue and to hear that national anthem song. I don't know, there's just something about it that gives you a feeling of pride.

How difficult was it for you to play both summer ball in the WNBA and winter ball in Italy?
It's a lot of wear and tear on the body, that's for sure. I tell a lot of the girls that are playing in the WNBA today and playing overseas to really take care of themselves because it really does put a lot of wear and tear on your body. Fortunately I was able to take a month or two off before going overseas, which extended my career. Always give your body a break. There's money to be made over there, and we don't make as much in the U.S., so that's why we have to do it.

Who's the best coach you've ever had and why?
It has to be coach Van Chancellor over here. I just think he's an overall great guy. He's a great family man; he has a lot of great morals; he's a Christian man. He always felt like a dad to me, the father that I never had. He has a passion about the game, and to me, that's one of the assets you have to have for being a great coach, and he has it.

How valuable was your sister Peggie (fellow Mississippi Hall of Famer) to you in your development as a basketball player and as a person?
I don't know if I'd be where I am today without Peggie, just because of the competitiveness we had in our childhood, and just trying to follow in her footsteps was a big task for me. That's what drove my career because I always wanted to do better than her, and I (was) always in her shadow of being Peggie's little sister. I just wanted to get away from that, and I think that's what drove me and helped make me who I am today.

What do you enjoy most about coaching?
Man, just seeing the impact that you're making on young girls' lives. I was able to stay in it for four years, and I saw one of my freshmen into her senior year, and just seeing how she developed not only as a player, but as a person as well. To  have them call you after (they) graduate and appreciate what you've done and impacted their livesto me, that's the greatest feeling of it all.