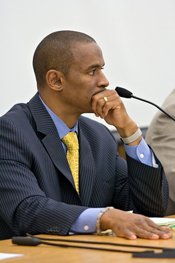 Jackson residents almost got a chance to vote on a proposal to raise hotel taxes to fund a police pay raise before a Senate subcommittee killed it Monday. The bill's death came just hours after Jackson police managed to push the legislation through the House. House Bill 1710 would have allowed the city to hold a referendum vote on a proposed $1.25 per day tax upon each occupied hotel or motel room inside Jackson city limits. The vote, similar to the 2004 referendum vote to fund the construction of the Capitol City Convention Center, would have required a 60 percent majority.

Sen. Hob Bryan, D-Amory, who headed the finance subcommittee that killed the bill, said the action had nothing to do with his stance on a police pay raise, but would set an uncomfortable precedent.

"We're always faced with some legislation like this from other cities in the state, and if we gave Jackson this, there would be no way we could deny anybody else," he said.

Bryan added that the city could abuse the new revenue, despite language in the bill limiting the revenue generated from the hotel tax to police salaries.

"The fact that it was earmarked for the police pay raise was no guarantee that the city would not take money from the police budget and earmark it for other parts of the city budget. The earmark, I think, was a red herring," Bryan said. "You give me $100,000 to use on traffic lights. I'm already spending $100,000 on traffic lights, so I'll just use that money I was already putting on traffic lights for something else. They might not do it immediately, but they might do it over years."

Ward 6 Councilman Marshand Crisler said he was disappointed by the subcommittee vote and questioned Bryan's logic, saying a similar appropriation had already been made regarding the referendum vote on the convention center.

"That would be the same as saying we would have put the convention center money into the general fund, which we obviously didn't do," Crisler said.

Jackson Rep. Credell Calhoun, who had worked with police in authoring the bill, said he had expected the bill to go over better in the Senate.

"It easily passed through the Local and Private Committee, and I was told it would be an easy pass through the finance committee," Calhoun said. "The city has less and less revenue to work with, while we still provide police protection to everyone, including people coming in from outside the city. I don't think it should be a problem for them to share that burden."

Jackson police were able to blast the bill through the House on incredibly short notice. HB 1710 saw its first committee in early April.

"We were a bunch of police officers in our uniforms, looking straight at (House members) when they passed it," said Juan Cloy, president of the Jackson Police Officers Association. Bryan said members of the Jackson Police Department also sat in on Senate committee meetings, though Cloy said the Finance Committee dumped the bill into a subcommittee that no one knew about.

"Bryan and the others did a cowardly thing," Cloy said. "They decided to not let this go through until 5:30 in the evening, after we sat there all day long. It was the most cowardly thing I've ever seen, and these people are what's running the state."

Sen. John Horhn, who supported the bill, said police sat in on the Local and Private Committee and the Finance Committee, but did not realize the chairman was going to move the bill to a subcommittee.

"Nobody had a chance to go and make their case," Horhn said.

Cloy and other officers have been demanding pay raises from city officials for months, though the ailing city budget has squelched the effort. Police Chief Malcolm McMillin canceled police overtime last year, saying the former police chief had barreled through more than 50 percent of the overtime budget in a handful of months. McMillin has extended officer shifts to 12-hour shifts to plug the resulting holes in the JPD schedule.

McMillin has said he supported a tax increase on hotels and motels, so long as the revenue went exclusively to fund officer pay raises.

Crisler said legislators acted irresponsibly in killing the bill, explaining that almost 40 percent of buildings inside city limits are occupied by tax-exempt bodies such as churches, non-profits, and city and state government.

"It takes money to operate the system, and right now the city is the only one spending money to see that the sewer system, the police department and fire departments are operating, and we're doing it on limited resources," Crisler said. "Housing the (state capitol) is a burden that no other city has to deal with."

Bryan said if the city considered government buildings a burden, then they should say so.

"I wonder if they're suggesting we close down the Woolfolk building, close down the Sillers building and move state government out of Jackson to someplace else," Bryan said. "If having state office buildings in the city of Jackson is an imposition on the people of Jackson, if the city wants us to move those buildings outside the city to remove that burden. If that's the case, I'd sure like to hear it."

I heard on the news that legislators wanted to be exempt from paying the tax. Hmph. "I wonder if they're suggesting we close down the Woolfolk building, close down the Sillers building and move state government out of Jackson to someplace else," Bryan said. "If having state office buildings in the city of Jackson is an imposition on the people of Jackson, if the city wants us to move those buildings outside the city to remove that burden. If that's the case, I'd sure like to hear it." So, your way or no way? Isn't that a great attitude to have?