A Review of "The Incredibles" 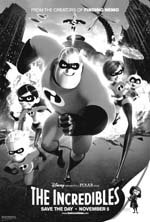 Overflowing with action, heart, imagination and meaning, "The Incredibles," the latest collaboration between Walt Disney Pictures and Pixar Animation Studios (and one of the last, following last January's decision to dissolve the successful partnership so that the latter can strike out on its own), is by far the funniest and possibly the best film to come along so far this year. With spectacular animation and an energy certain to infect even the most jaded of moviegoers, "The Incredibles" is a postmodern take on superhero stories that offers plenty of laughs and fun for adults as well as kids.

The core characters of the film are three undercover superheroes (or "supers"): Mr. Incredible, who boasts amazing strength (voice of Craig T. Nelson); Elastigirl, who can stretch her body as needed (voice of Holly Hunter); and Frozone, who can create massive amounts of ice at will (voice of Samuel L. Jackson). Revered by the public and the media, they are able to perform feats of crime fighting that the police cannot. But when Mr. Incredible is sued after saving the life of a man attempting suicide, the supers are forced to retreat into hiding and never display their talents.

Mr. Incredible and Elastigirl marry and assume the benign suburban identities of Bob and Helen Parr. While they freely use their powers at home around their equally gifted children, Dash (blessed with lightning-fast quickness) and Violet (able to become invisible), by day they endure the suburban ennui of cubicle toil and domestic frustration. Mr. Incredible is lured out of hiding, however, when hired to carry out a secret mission on a remote volcanic island by (unbeknownst to him) an obsessed fan bent on terminating all supers, a decision that places his life in danger and his family's secret in jeopardy.

At two hours in length (the longest computer-animated film to date), the movie is epic in both size and scope, but it never drags or fails to deliver in terms of excitement or importance. "The Incredibles" is rated PG for "action violence" (the first of Pixar's features to carry a rating higher than G), which is well earned and not a mere overreaction by the conservative MPAA. There is almost nonstop peril during the film, and peripheral villains are incapacitated or killed frequently. While none of this is remotely graphic, it may be too intense for younger children.

"The Incredibles" is a stirring adventure, a prime slice of Pixar perfection that should be seen on the big screen at least once. With action that moves along at an intoxicating, furious clip, the events of the final third dash across the screen faster than cash registers at Christmas. The writing is expectedly sharp, offering not only a host of witty jokes but also taking advantage of some clever opportunities afforded by the characters' powers. In addition, the themes of the movie carry surprising weight, with important messages about family, identity, bureaucracy and the nature of crime itself.

The film's attention to detail, not only in terms of its visual splendor but the affection it has for its characters and their struggles, makes it worthy of repeat viewing. In a year full of movie disappointments, "The Incredibles" is a boisterous, unqualified success. In fact, the only thing disappointing about this remarkable story is that, with the relationship between its makers ending, we can never hope for a sequel.