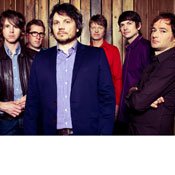 Mississippi roots helped Pat Sansone (far left) and John Stirratt (far right) find their place as alternative megastars in the band Wilco. Sansone grew up in Meridian, and Stirratt studied at the University of Mississippi.

As other band members have come and gone, John Stirratt and Jeff Tweedy have been the constant core of Chicago-based alt-country/rock band Wilco since its creation in 1994.