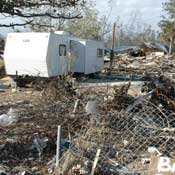 Four years after Hurricanes Katrina and Rita struck the Gulf Coast, and a month after the Federal Emergency Management Agency said it was going to end its temporary housing program ...

March 1 was to be the deadline when victims of Hurricane Katrina had to leave the temporary housing provided by the Federal Emergency Management Agency. After nearly five years, some ...