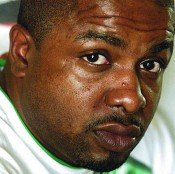 How to Free an Innocent Man

Cedric Willis is a Jackson resident who was wrongfully convicted in the shooting death of Carl White in 1994. In 2006 the Jackson Free Press reported that Hinds County Circuit ...

Willis to be Compensated for ‘Egregious' Prosecution

Jackson resident Cedric Willis says he is happy that the state of Mississippi agreed to pay him compensation for wrongfully convicting him for the shooting death of Carl White in ...